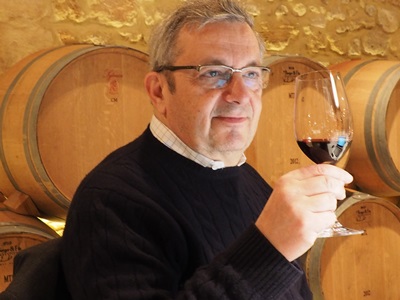 My name is Izak Litwar and I'm living in Copenhagen, Denmark. I'm a total wine-freak and freelance wine writer and I've been tasting and writing about wines since 1984. I concentrate 100% on Bordeaux wines as I've fallen in love with these wines because of its many styles, kind and friendly wine people and beauty of Bordeaux area and the town itself.

Since 1987, I've been participating in many vertical tastings while coming to Bordeaux twice a year.

In November 2018 I participated in an extraordinary tasting of 21 wines from 1918 vintage, where majority of wines showed verve and vitality due to incredible life span.

In May 1998, my only book I've written up to now, about Pomerol, only in Danish language, was published in Denmark. I'm considering making an e-book version of it updated to recent things in this district.

Beside enjoying drinking wines, I also like to drink beer (especially Scottish, Belgian and Polish ones), Scottish malt whisky (single cask ones from especially Springbank and Highland Park) and vintage Armagnac (especially from Fontaine de Coincy).

Occasionally I review restaurants in Denmark and abroad - check out my reviews at www.tripadvisor.dk, among others Geranium in Copenhagen and Le Pressoir d'Argent (Gordon Ramsay) in Bordeaux, two highligts of my culinary experiences up to now (February 2017). In April 2019, I had excellent dinner at famous Basque restaurant Martin Beratasequi in Lasarte, several kilometres outside San Sebastian.

LOOKING FORWARD TO PRIMEURS IN MARCH/APRIL 2020 TO GET CONFIRMED THE GREATNESS OF 2019 VINTAGE.  IMPORTANT - UNFORTUNATELY AND BECAUSE OF MAJOR CORONAVIRUS OUTBREAK IN THE WHOLE WORLD, I'LL NOT BE TRAVELLING TO BORDEAUX FOR EP IN MARCH/APRIL AS I ALWAYS DO. MANY EVENTS THERE HAVE BEEN CANCELLED/POSTPONED TO LATER THIS YEAR.

ALL CHATEAUX PROFILES HAVE BEEN UPDATED WITH ADDITIONAL TNS/RATINGS OBTAINED DURING BEYERMAN TASTING OF 2018s IN SEPTEMBER 2019 (COPENHAGEN) AND VISITS IN BORDEAUX, OCTOBER 2019.TROTANOY PROFILE HAS BEEN PUBLISHED TODAY THE 30TH MARCH 2020.

NEW ADDITION TO MY WEBSITE IS BURGUNDY BLOG IN NEWS CHAPTER. TASTING NOTES FROM HUGE BURGUNDY TASTING WITH DIFFERENT PRODUCERS PLUS A STUPENDOUS WINE DINNER WITH DOMAINE PERROT-MINOT WINES IN COPENHAGEN (BOTH TAKING PLACE IN JANUARY 2020) ARE PUBLISHED.

OUTRAGEOUS TASTING OF 21 BORDEAUX WINES FROM VINTAGE 1918 - READ IT HERE (BOTTOM OF THE PAGE).

HERE ARE MY TOP TEN WINES TASTED IN 2019