A VERY RELIABLE 3. CRU WINE AND AN EXCELLENT VALUE FOR MONEY

Caroline Frey - has been taking care of La Lagune since 2004

La Lagune is situated on the right side of the road, called Route des Chateaux, after you pass Bordeaux suburb, Blanquefort (15-20 minutes drive), in the comune of Ludon. The soil here is mostly gravel with some sand in upper layer. The 80 ha big vineyard houses vines of 60% Cabernet Sauvignon, 20% Merlot, 10% Cabernet Franc and 10% Petit Verdot. La Lagune can be "mistaken" for a classy Margaux wine when tasted blind, with its sheer elegance and finesse. Some years ago (I think it was in 2011) when I spoke to a winemaker from Margaux commune about La Lagune making splendid wines, the comment was "La Lagune has a "warm" soil and Merlot is too grilled and overripe". Utter nonsense!

My first visit there was in 1985, I wasn't particulary well-received as the owner was morning sour for unknown reason, but she became much more happier later on during visit, as she did find out that I knew a lot about wine. Since then, I rarely visited La Lagune, but it changed in March 2004, when I was accomodated at La Lagune for a couple of days by Union des Grands Crus de Bordeaux during primeur week. I met young and carismatic Caroline Frey by then. She's just started to manage La Lagune after her parents bought this property in 2000. Caroline has steadily pushed the quality up, bought some more land and made a lot of improvements. She also makes wine at family's other winery since 2006, Paul Jaboulet in Cotes du Rhone. I've visited La Lagune frequently since 2004 and every year since 2010.

In September 2013, Caroline Frey appointed a young qualified oenologist, Maylis de Labordiere, as new cellarmaster at La Lagune. She's not of Bordeaux origin, comes from Beaujolais. On my question, "why you chose Bordeaux and not Burgundy to work with wine", she answered, "many friends of mine told me to go to Bordeaux and take education there, as it is the best place to do it". It was very hard for her to start with so difficult vintage as 2013, but it's helped a lot to have contributed greatly in four excellent vintages in row following 2013. 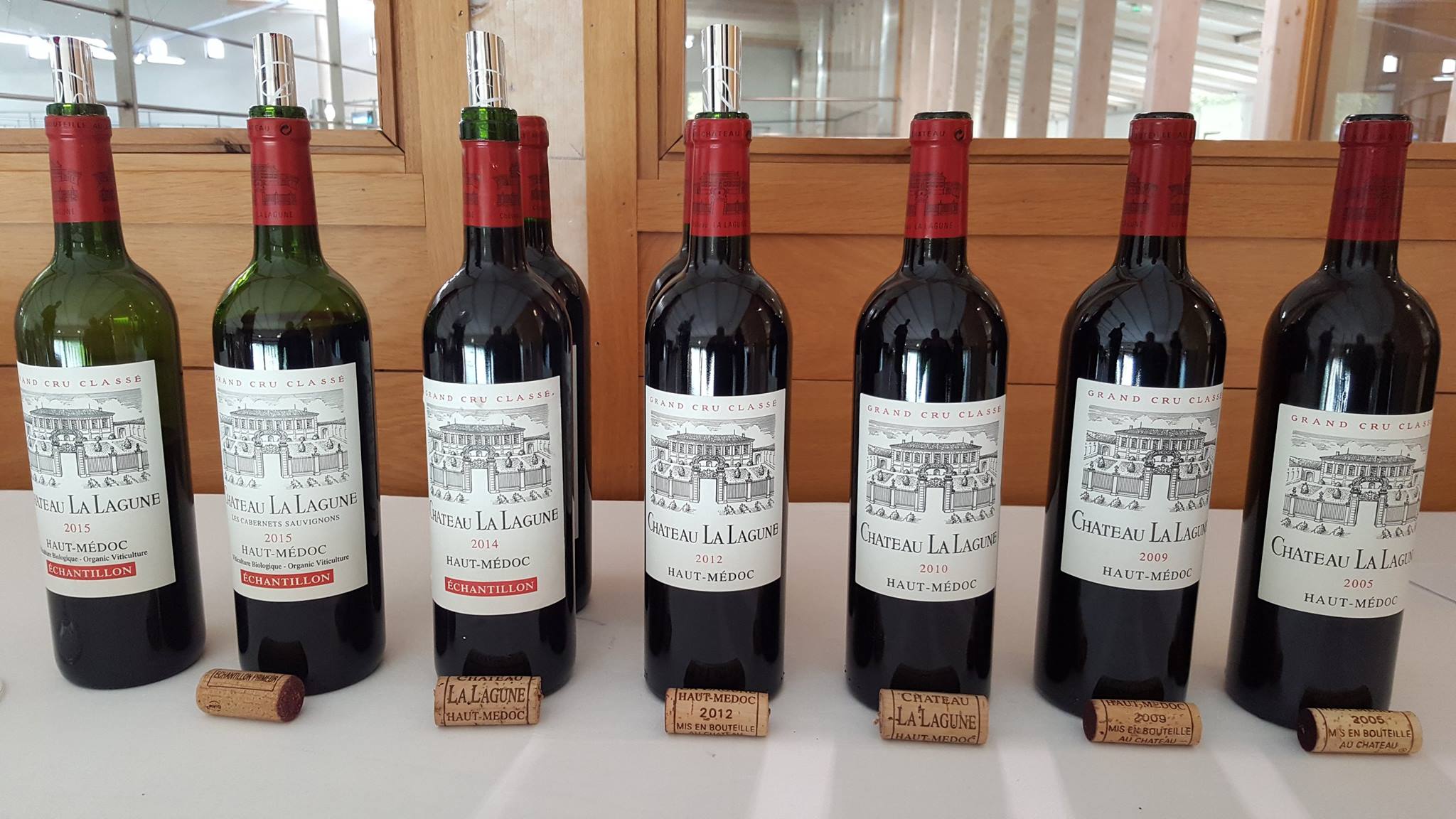 In April 2017 I retasted 2015 and was informed. that final blend turned out to be 70% C.S. + 20% Merlot + 10% Petit Verdot. I upgraded rating of this wine simply because it tasted better than each of those two cuvées from a year before! Retasted it again in April 2018 and there's a slight correction of final blend. It's 65% C.S. + 30% Merlot +5% Petit Verdot. Wonderful stuff, as sophisticated, elegant and pretty as its owner. Same impression in April 2019.

Tasted twice - last time in April 2015. Consistent notes. In April 2014, I tasted four different blends and already then Caroline considered of declassyfing 2013 La Lagune. She didn't do it anyway and chose the cuvée of almost 100% Cabernet Sauvignon as Grand Vin. She admitted that 2013 vintage was the hardest and most difficult to make since she's become manager of the property. I wouldn't say it's a typical wine of the property. Well-balanced, light and round, compensates for lack of concentration and depth with charm, elegance and seductive approach.

Tasted twice - last time in April 2016. Consistent notes. It had sweeter fruit on the nose and palate than in 2010, less deep and concentrated but elegant and tasty with meaty finish. Impressive effort.

2019 HARVEST IN BORDEAUX IS FULLY OVER AND WE'VE TO WAIT UNTIL PRIMEURS IN MARCH 2020 TO GET CONFIRMED THE GREATNESS OF 2019. FOR UPDATES - CHECK HARVEST 2019 IN HARVEST CHAPTER!

FULL 2018 BORDEAUX REPORT WITH TNS AND RATINGS ON 395 BARREL SAMPLES TASTED DURING PRIMEUR IN MARCH/APRIL 2019 AND 50+ WINES FROM OTHER VINTAGES TASTED/RATED. ALL CHATEAUX PROFILES HAVE BEEN UPDATED WITH ADDITIONAL TNS/RATINGS OBTAINED DURING VINEXPO IN MAY 2019, BEYERMAN TASTING IN SEPTEMBER 2019 (COPENHAGEN) AND FROM SHORT VISIT IN BORDEAUX IN OCTOBER 2019

NEW ADDITION TO MY WEBSITE IS BURGUNDY BLOG IN NEWS CHAPTER. MOST RECENT ADDITION IN PROFILES IS CHATEAU AUSONE AND LEOVILLE BARTON/LANGOA BARTON. PROFILE OF PHELAN SEGUR HAS JUST BEEN PUBLISHED. NEXT PROFILE CORBIN MICHOTTE/CANTELAUZE - PRIMO JANUARY 2020.

REPORT ON AN OUTRAGEOUS TASTING OF 21 BORDEAUX WINES FROM VINTAGE 1918 - READ IT HERE (BOTTOM OF THE PAGE).

HERE ARE MY TOP TEN WINES TASTED IN 2019