This property has greatly improved since 2016 vintage

La Cabanne is situated a few hundred meters from Bourgneuf and Clinet in the best part of the district, Le Plateau Argileux (on the right side of Route Nationale 89 in direction Perigueux). The surface here is clay mixed with sand and subsoil is rich in stoned clay-like greasy stones with clear brown lines of iron oxide. Here, we are talking about a traditionally made wine for long keeping as it evolves slowly, without modern style gimmicks.

Estager family originates from Correze and settled in Pomerol in 1952. Francois Estager has been in charge of La Cabanne since 2000 (after the death of his father the same year) and has steadily tried to improve its quality. The last two vintages, 2016 and 2015, are clear proof, that he's been very successful and La Cabanne has moved quite high up in quality.

At the end of March 2017, Francois Estager arranged a tasting of all vintages between 2000 and 2015 in which I participated. Only 2008 was missing among tasted wines because of the fire in March 2010,  which destroyed the cellar with this vintage in vats. The entire cellar and winemaking facilities had to be rebuilt. The tasting was a great experience and a great look into La Cabanne's style and capacity. 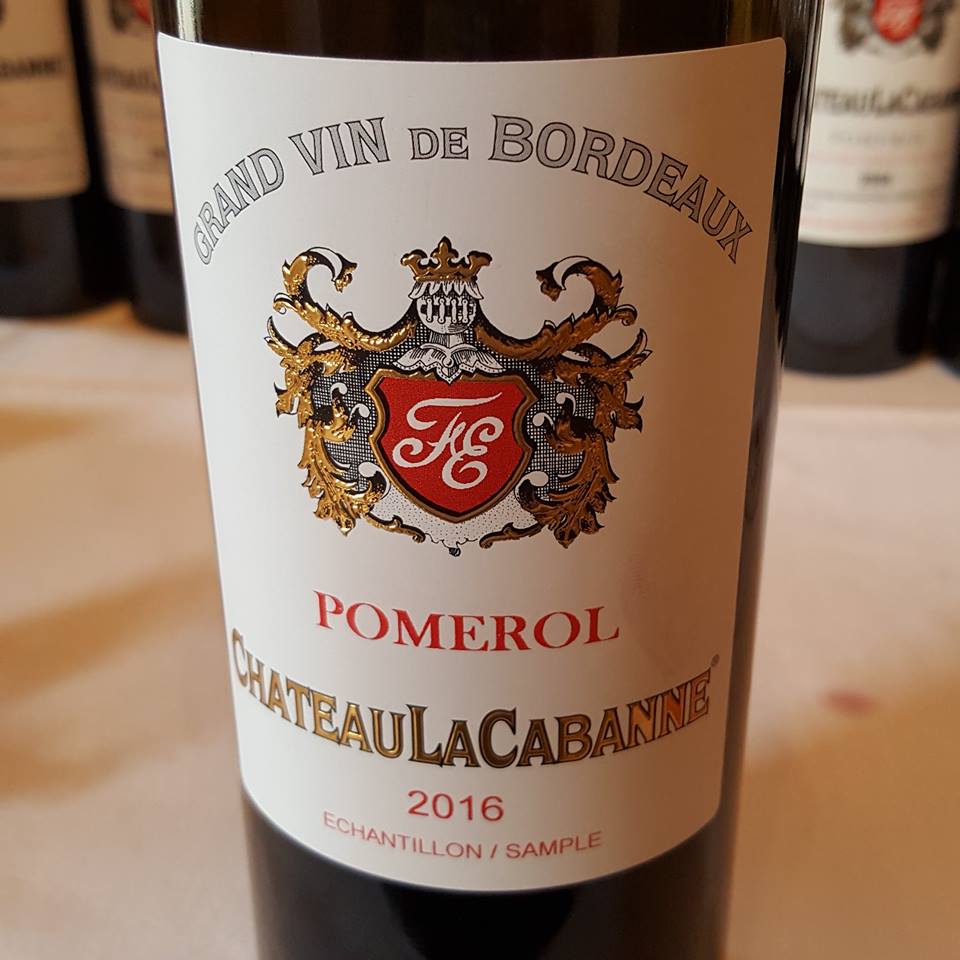 Fabulous effort from La Cabanne in 2016!

Tasted in May 2019. Since 2013, consulting oenologist here has been Thomas Duclos and his work can clearly be tasted beginning with the 2015 vintage when the quality of the wine went significantly up. Very intense nose of black cherries, potent and strong, very stylish, precise and focused, splendid complexity and length. Badass wine. 94% Merlot + 6% Cabernet Franc.

Tasted in March 2017. Revelation! This wine surprised me a lot as it probably is one of the best vintages ever made at this property! Frankly, I didn't expect this wine to be that intense and powerful. Great acidity, depth and length. Fabulously intense nose of black cherries. I believe 2016 will surpass 2015 here. I hope this wine won't be filtrated before bottling.

Tasted twice - last time in March 2017. Consistent notes. Attractive and tasty fruit, very good acidity, balance and firm finish, but this wine is light and short. It was impossible to make better wine in this rainy vintage. Won't keep long.

Tasted in March 2017. A bit tight and some touch of green flavour, which means ripeness of fruit and tannin hasn't been optimal.

Tasted in March 2017. Stronger and with fatter tannin than in 2009. More concentration of cherry fruit with the scent of fresh truffles. Great complexity and length. Impressive vintage for the property.

Tasted in March 2017. Fresh truffles on the nose, potent, complex and long, fruity finish. Reminds a lot of splendid 2005.

Tasted in March 2017. Lack of ripeness, chunky wine with nice tasty fruit, round but short aftertaste.

Tasted in March 2017. Seemed not to be that affected by extreme heat during summer 2003, only a touch of liquorice. Strawberry flavour. Otherwise round, tasty and with a fruity aftertaste.

Tasted in March 2017. Keeping its freshness well, mature flavours of truffles and raspberries. Elegant and tasty. Good balance. Just about reaching its peak.

Tasted in March 2017. Not unlike 2001 and 2002, more forward, however, more intense and with better fruit. Coffee and truffles. Fine mature Pomerol wine to enjoy.

Tasted in March 2012. Backward and tight, concentrated and long. We have to wait for this wine to soften.

Tasted in March 2012. Supple and potent at the same time, powerful tannin and equally powerful fruit with metallic (truffle) scent coming from "crasse de fer" (iron dirt) which La Cabanne has a lot of in its subsoil. Long finish. Splendid stuff for long ageing and well worth the rating.

Tasted in March 2012. This wine was a bit tired, light, round and charming. Should be consumed soon. Was at its peak some years ago.

Tasted twice - last time in March 2012. This wine was recorked in 2008. Before tasting it in Copenhagen, I tasted this wine already in 1988 together with Francois's father, Jean-Pierre Estager. Stunningly expressive Pomerols at 24 years of age. 24 years later, in 2012, this 48 years old wine hasn't lost anything of its vitality and energy and tasted exactly the same as in 1988!! Truffles everywhere. Tannins were still fresh backed by the subtle fundament of acidity, formidable balance, depth and length. This wine had enough stuffing to be alive and kicking for an additional 10 years. A great example of how unbelievable the long life span of Bordeaux wines have. Meditation wine – yes it truly is!