A true king of Pomerol and one of Bordeaux' elite wines! 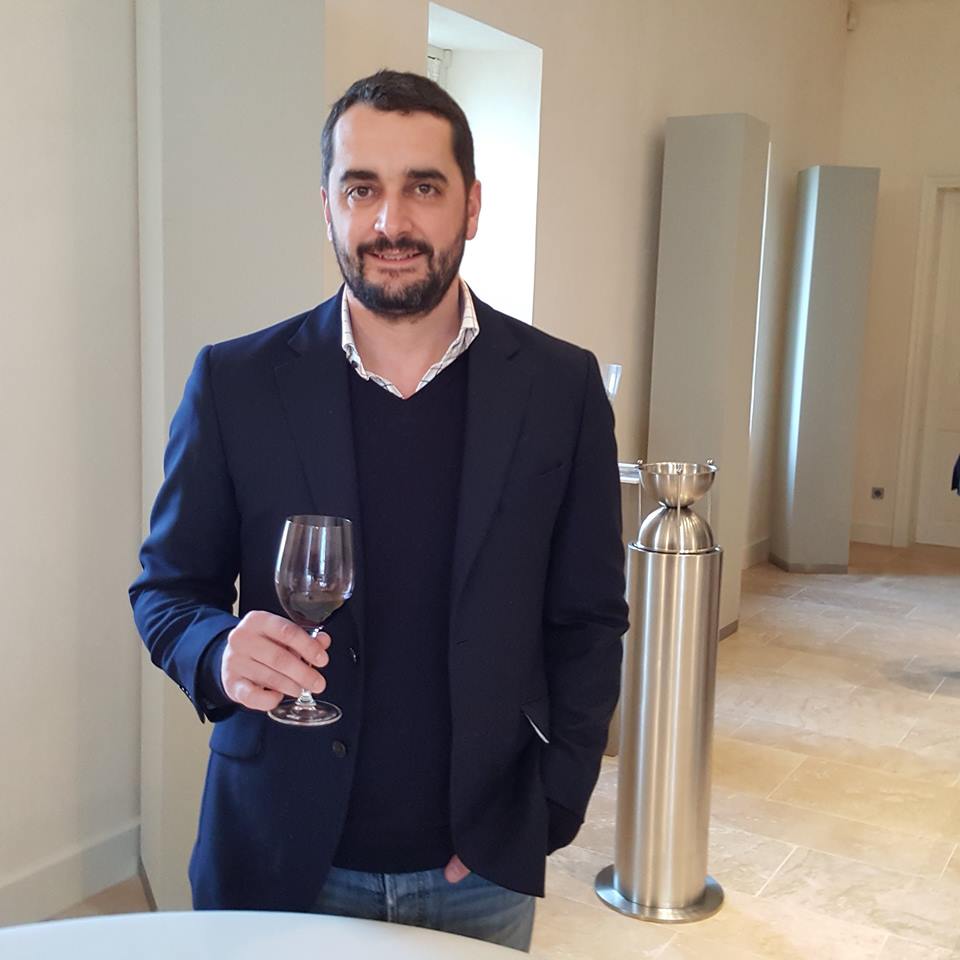 Pétrus' soil has a 60 cm deep layer containing clay and sand in ratio 90:10 on its upper part. This kind of surface is only found at Pétrus and no other places in Pomerol! The subsoil is "crasse de fer" and clay. It can barely surprise anyone that Merlot has a smashing time here because the growing conditions at Pétrus are just perfect for this grape variety.

Petrus' vineyard is 11,5 ha big, planted with 95% Merlot and 5% Cabernet Franc, vines are on average 35 years old, and wine is kept for 20 months in 100% new barrels. Since January 2008, it's Jean-Claude Berrouet's (former cellarmaster at Petrus) son, Olivier Berrouet, who's the property manager and responsible for the winemaking.

At its best, Pétrus is an incredibly intense, concentrated, nuance-rich, refined and extremely multidimensional wine, demanding absolute attention and one's senses running at full speed. Pétrus does typically shut down quickly after "birth" and should therefore not be touched before it has aged for 10-15 years. It is extremely long-lived, especially in superb vintages, and can, with advantage, be stored for 25-30 years or even longer.

Tasted in April 2022. 100% Merlot. 13% alcohol. Fresh, intense violets, iris, some liquorice, raspberries, classy and sophisticated, exquisite fruit and tannin, strong structure and long aftertaste. A lighter version of wine from this property, which isn't a surprise considering the challenging weather conditions in 2021.

Tasted in April 2018. It displayed great freshness, complexity and purity, stunning complexity and length. Awesome purity also present. 2017 is going to be a fabulous vintage for this Pomerol jewel.

Tasted in April 2016. This is a very sublime wine that benefitted from 4 dry months, April, May, June and July. Harvest was prolonged and finished at the end of September. Subtle, lot of finesse, sophisticated and incredibly complex. Not the most powerful and concentrated vintage of Petrus, but 2015 has stupendous elegance and richness instead.

Tasted in April 2015. It was harvested between 23rd September and 4th October, the yield is only 30hl/ha. Freshness, very sophisticated with great complexity, stunning richness, excellent structure and awesome long finish. Among the best wines of the vintage, that's for sure.

Tasted in March 2014. It was harvested on 2-3-4 October, only 26 hl/ha, lost around 40% of the potential crop during flowering. The late harvest in 2013 for this property was very beneficial, and it was reflected in the wine. Excellent effort, refined, balanced, sweet fruit, excellent acidity, structure and complexity.

Tasted in April 2013. I found 2012 here quite similar to 2011. Elegant style, finesse, refined, long on the palate. Aromatic black cherries, exquisite balance, velvety fruit/tannin. Great complexity and sophisticated touch. Harvest finished at Petrus on 8th October, before the arrival of big rain, which came one week after.

Tasted in April 2012. This wine had fresh acidity, delicate berry fruit, discrete oak and excellent balance. Lighter than usual but with excellent richness and finesse.

Tasted in April 2011. Grapes obtained 14.5% alcohol, yield 35 hl/ha and was harvested between 27th September and 2nd October. An incredibly complex wine, refined, silky and sophisticated on the palate, more than 30 seconds long finish. Exceptional stuff, but I think 2009 was maybe a bit richer and deeper than 2010. It can, however, change with ageing. 98-99p.

Tasted in April 2010. This wine brought great intensity, depth and sophisticated nose of black cherries. Velvety and very concentrated on the palate with enormous depth and richness. Probably the most accessible wine at the "baby" stage from this property I've ever tasted. A future legend.

Tasted in April 2008. This wine didn't make the headlines at all in April 2008. Rather subdued and oaky. I guess adding press wine will do Petrus 2007 a great favour. I didn't have a chance to retaste this wine yet - maybe retasting would give much better TNs.

Tasted in April 2007. Black red. Incredibly aromatic, sophisticated and incredibly well-constructed wine. Massive amounts of dark cherries/blueberries and ripe tannin. The balance was utterly breathtaking in this wine, but so was the length on the palate. Still, in my opinion, it's not better than the 2005 version.

Tasted in April 2006. Well, not quite as gracious as Lafleur, but there was an enormous concentration of everything, unbelievable nuance richness and extreme depth. Silky aftertaste. Early harvest paid off! Oh-la-la wine.

Tasted in April 2004. Very dark, not as strong as usual, deep nose of spicy raspberries, blueberries and blackberries. Exemplary structure and many layers of everything. Very refined and sophisticated with ling aftertaste. A stunning wine, which can be cellared for 20 years. The wine team at Pétrus chose the time of the harvest perfectly for nuances of cooked fruit, marmalade and dry tannin, which many properties in Pomerol suffered from in 2003 because of the scorching weather, aren't present in this wine.

Tasted twice - last time in September 2012. Consistent notes. Almost black red, dense and compact with an intense aroma of dark cherries, raspberries and truffles. There are many layers of everything on the palate, great depth, beautiful structure and a big fruit concentration. It all is tremendously put together, and this wine is a delicious experience from the beginning to the end. The perfect balance in this wine assures long life – 20-30 years. In September 2012, this wine was tasted from the bottle, and it confirmed 100% what the barrel sample promised. Thick raspberries with blackberries on the nose and palate, very strong structure, incredible richness and length.

Tasted in June 2001. Like Lafleur, Pétrus is an astonishing example of 2000 vintage's heavenly quality. Merlot is outstandingly fantastic. Maybe Pétrus is barely so charismatic and monumental as Lafleur just now, but after 15-20 years, the difference between those two wines will be zeroed, and Pétrus can match Lafleur at every level.

Tasted in September 2003. This wine is almost an exact copy of 1995 but significantly lighter and less sophisticated. Here we have for a change a feminine version of Pétrus. It tastes splendid now and will continue with that in the next 10-15 years.

Tasted in September 2003. Elegant but tart wine. Not the normal concentration and weight. This wine tastes somewhat disconnected. Not my cup of tea.

Tasted in September 2003. Not exactly in balance, tart, light, and quite tannic. Merlot had big problems with ripeness in this vintage, and you can taste it.

Tasted in September 2003. Black red, intense and dense. Truffles everywhere, extremely concentrated, classic with enormous length and aftertaste. This is Pétrus at its apogee! Perfect exploitation of vintage's raw material. This wine has at least 20 years of eventful life ahead.

Tasted in September 2003. A terrific and splendid wine for the vintage. Pomerol was the only district in Bordeaux, producing eminent wines in 1994. Great depth on the palate, incredibly intense and with excellent balance. A delicacy for 15-20 years of enjoyment.

Tasted in September 2003. From magnum. Surprisingly deep on the palate with ripe fruit. Slightly edgy tannin but on the whole a well-made wine, despite vintage's problems (rain during harvest). Refined concentration and length. I will keep it for additional 5-8 years.

Tasted in September 2003. A wolf in sheep's clothing. No sign of age in this wine. Extremely sophisticated and incredibly promising. Very complex and with enormous length on the palate. Let it rest horizontally for 10-15 years more.

Tasted in September 2003. Very deep on the nose and palate. Perfectly ripe fruit with toasty character, lots of nuances and beautiful length on the palate. Superbly balanced. It's a stunning Pétrus, but there's a feeling of missing the final touch. This vintage is the last one where filtration of the wine was done. Just perfect to be consumed today.

Tasted in September 2003. Dry, hot fruit, fragile structure, edgy and not entirely harmonious. Not a big deal – not any deal at all. Disappointing wine for Pétrus' standard. I think this wine will fall apart very soon.

Tasted in September 2003. Red-brown. Well-preserved prune marmalade, Holds on ingredients quite well, strong tannin but not edgy. Fine balance. This wine is just up to standard in this challenging vintage. Ready to drink now and won't improve by additional keeping.

Tasted in November 2019. Despite this vintage experiencing bad weather and unripe grapes, Petrus managed to make wine of the vintage. Our bottle showed incredibly complex, sophisticated, rich and fruity wine.

Enjoyed during dinner at Domaine de Chevalier with other excellent wines in April 2014. Seemed like a bottle kept under pristine conditions - youthful dark colour, almost black ink, powerful, extraordinary complexity, structure, depth and length. Despite 50 years on its birth certificate already, I'm pretty sure this wine will easily live for another 50 years!! Heavenly stuff. 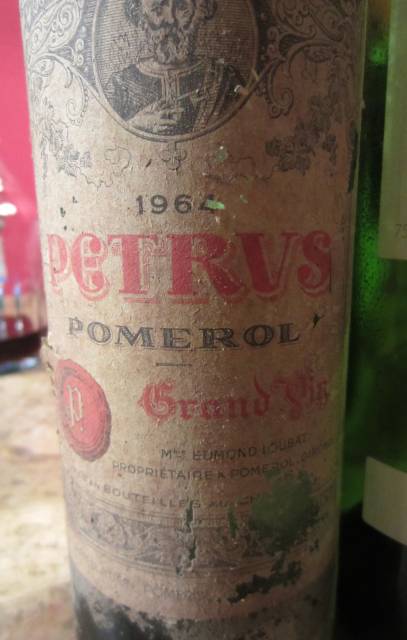 Tasted in September 2003. Belgian bottling. It was, after all, a fantastic finale of the tasting – a showstopper. It was a wine with a fabulously delicate and intense nose of ripe berries mixed with truffles, chocolate and cacao. Fabulous everywhere and extraordinary sublime. There is still plenty of life in this artwork of a wine.