Monumental wine from Saint-Estephe and one of Bordeaux' finest wines!

It's been one of my favourite Bordeaux wines for a long time. While particularly strong in the 1950s and 1960s, Montrose got the nickname "Latour of Saint-Éstephe" due to its power, strength, massive concentration, depth and long finish. It's always been classy, stylish Bordeaux with long life. When mature, it's a beautiful wine to enjoy. Vintages like f.i. 1952, 1953, 1955, 1959, 1961 and 1964 (harvest just finished a few hours before massive rainfall) are legendary. Not to mention outstanding vintages like 1989 and 1990.

After the long reign of the Charmolüe family, Montrose changed hands in 2006, when the Bouygues family bought this property. The new owners hired famous Jean-Bernard Delmas as a consultant, responsible for many stunning vintages at Haut Brion/La Mission Haut Brion. Herve Berland, previously managing director at Mouton Rothschild since 2006 and retired in 2011, took over technical director duties at Montrose in April 2012.

Montrose enjoys a highly favourable location close to the banks of the Gironde river, which ensures a very stable micro-climate. This micro-climate prevents frost from doing damage here - Montrose lost only 10% of its vines in the spring of 1991 when the "black" frost (gelée noire) hit Bordeaux and destroyed many thousands of vines all over the area. There is 95 ha of vines, all in one block, growing on a 3-4 meters deep layer of heavy gravel mixed with ferrous sand and a subsoil of clay and marl. Cépage is 65% Cabernet Sauvignon, 25% Merlot and 10% Cabernet Franc, and vines are more than 30 years old on average.

Since Montrose's acquisition in 2006, new owners have done extensive work to modernise, improve facilities, and streamline logistics. A new cellar, for instance, looks monumental. Because of solar cells, Montrose is more than self-sufficient in electricity. Montrose has appointed a new cellar-master from 1st June 2014.

Montrose is, without a doubt, a Super Second wine. In my opinion, the style of Montrose changed a bit after the change of ownership, and it's become more modern with slightly more extraction and more use of oak. Still, Montrose is a very true Bordeaux wine, reflecting the terroir. 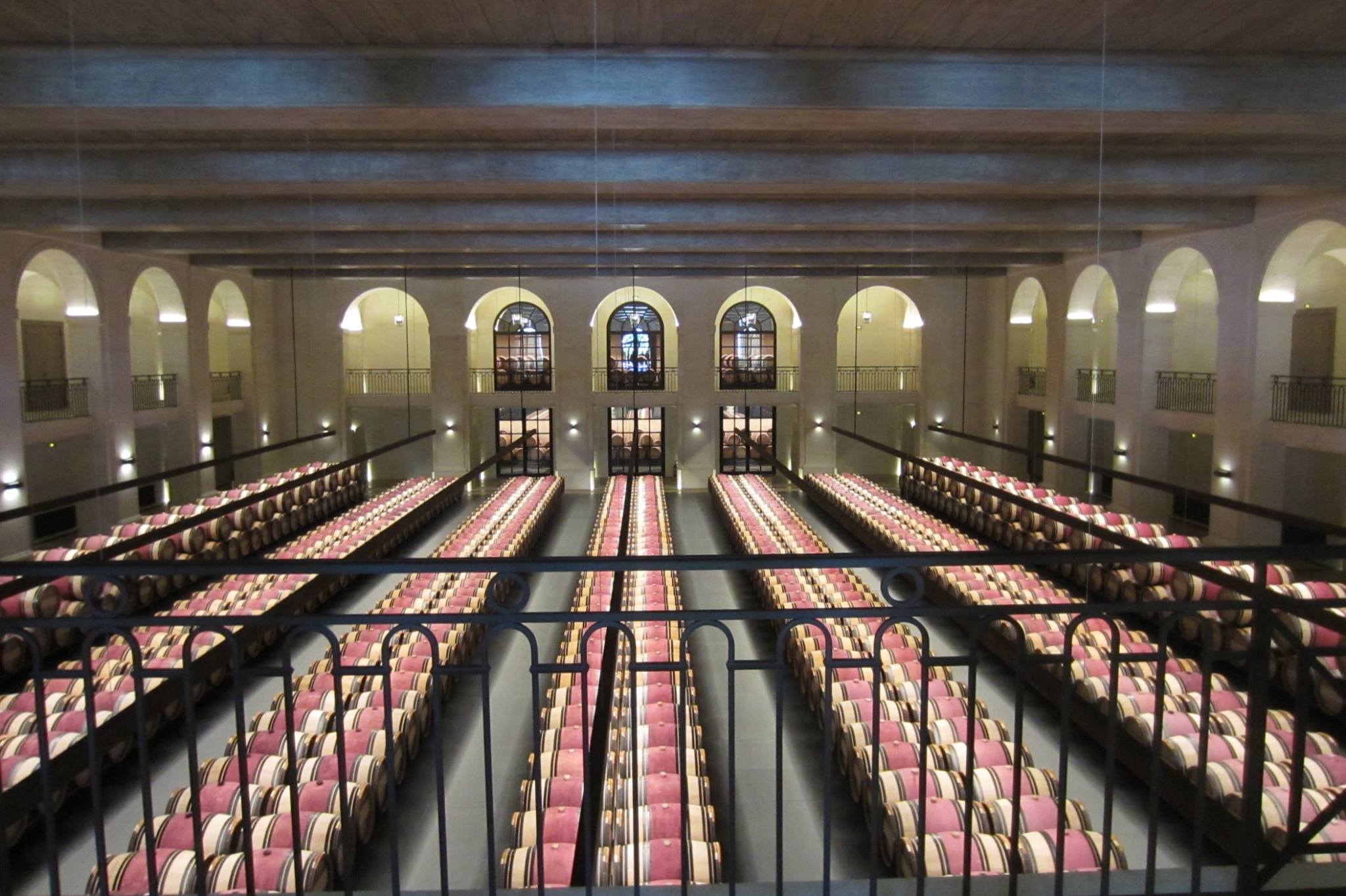 A new cellar at Montrose, as seen in April 2014 - looks fantastic.

Tasted in April 2022.  62% C. Sauvignon, 6% C. Franc, 31% Merlot, and 1% P. Verdot. 13% alcohol. More elegant than powerful in 2021. tight and mineral-like. Silky tannin, great complexity and a delicate mid-palate. Knowing that this property is always a long-time runner and needs many years to show its glory, I'll won't exclude a higher rating after bottling.

Tasted in November 2021. 72% C. Sauvignon, 20% Merlot, 6% C.Franc and 2% Petit Verdot. An intense and classy nose of ripe blackcurrants and wild black cherries. Succulent berries on the palate with vibrancy, perfect structure, and complexity. Long creamy finish. Yet another mind-boggling wine from Montrose!

Tasted in November 2021. 64% C. Sauvignon, 30% Merlot, 5% C.Franc and 1% Petit Verdot. Yes, it was a powerful wine, but it also had a lot of elegance and finesse. A little bit lighter in concentration than 2020, with silky berries and tannin. Great complexity, depth, midpalate and luscious aftertaste. Fabulous effort.

Tasted twice - last time in December 2020. 72% Cabernet Sauvignon, 20% Merlot, 6% Cabernet Franc and 2% Petit Verdot. 14.8% alcohol, but you can't feel it due to fruit and tannin fully integrating it. Classic Montrose and very classic for the district. Powerful, "an iron fist in the velvet glove"! Bulldozering but moving elegantly. Creamy and with incredible complexity and length. Knowing that Montrose is a slowly maturing wine, it can quickly improve with age.

Tasted twice - last time in November 2021. Consistent notes. This wine had a lot of silky fruit and tannin gently wrapped up by oak, great aromatic black fruit and a strong backbone. stupendous complexity and length on the palate. Immensely impressive.

Tasted in April 2016. 67% Cabernet Sauvignon, 29% Merlot and 4% Cabernet Franc. 13,8% alcohol. "Iron fist in the velvet glove" or "wolf in sheep's clothes", boom, the big concentration of everything, enormous depth and length, great complexity and richness. Magnifique! Indeed, it ranks among my top ten wines of 2015. 1. Growth quality!

Tasted in March 2015. a chewy and robust wine with excellent acidity, full-bodied and tannic structure. It has a rock-solid foundation on which fruit and tannin can "play" together for many years. This wine can develop into something spectacular.

Tasted in April 2014. It was very well knit, complex and finely structured, lighter than usual, equipped with silky fruit and tannin, and a smooth finish. one to enjoy before the big and long-lived vintages of 2005, 2009, and 2010.

Tasted five times - last time in June 2016. Consistent notes. In April 2013, this wine had an excellent nose of black cherries/blueberries, aromatic and seductive, velvety palate and a perfect length. On the light side. Gained in weight and concentration during the second year in barrel, confirmed while tasted in March 2015. Truffy and elegant wine. Even better in November 2015 with a delicious nose of grated chocolate, great intensity, splendid structure, impressive length, and finish. Same in June 2016.

Tasted six times - the last time in June 2016. Consistent notes. It displayed an enchanting nose of black fruit, seductive and intense, silky texture overall, well-structured and well-balanced, and long finish. Splendid for the vintage. Now in the bottle (April 2014), this wine has improved in intensity, complexity, depth, and length. Confirmed in March 2015 and June 2016. Not the same level of sweetness here as in 2012, but more depth and concentration.

Tasted three times - last time in April 2013. Consistent notes. This wine displayed a very intense and spicy scent of a cedar tree, leather and mocha, a strong backbone, powerful structure and long finish. You could feel the character of the soil here. This wine was made under new management and a new cellar master who arrived in 2007.

Tasted in April 2011. A pleasant surprise indeed, even if this wine didn't have the ripeness, depth and concentration of 2008. Well-balanced, lovely tasty fruit, round and with excellent length.

Tasted twice - last time in April 2011. Not consistent notes. It was made by entirely new technical staff after the change of ownership. The barrel (April 2007) was strong and distinct, with a spectacular structure, great depth, and a beautiful balance between dark berries and fat tannin. In April 2011, it tasted closed, and I was unwilling to reveal anything. Certain dryness was noticeable, but I don't think it was because of unripe fruit, but rather because oak flavours were not fully integrated yet. It'll take time for this wine to come out from its shell.

Tasted four times - last time in June 2016. Consistent notes. This wine had an incredibly seductive nose of truffles and cocoa powder, a strong backbone, a powerful attitude, a strong iron structure, excellent balance and a mega-long finish. A fantastic example of how exceptional this vintage is! Grace and sophisticated touch for all the money.

Tasted twice - last time in June 2016. Consistent notes. Distinguished truffy nose of leather, cassis and smoked tobacco leaves. Rich and sophisticated on palate, exquisite balance, complexity and staggering richness. There is no sign of the hot fruit. Fresh and with an incredibly long finish. This is a fantastic tribute to the vintage as well.

Tasted in November 2021. 62% C. Sauvignon, 34% Merlot, 1% C. Franc and 3% Petit Verdot. This wine was made by previous winemaking staff as Montrose changed hands in 2006. Seductive nose with ripe berries, plenty of well-defined fruit and corresponding tannin on the palate. Full-bodied, harmonious and with bright acidity. Typical wine for the property and the district of St. Estephe. Great effort.

Tasted four times - last time in December 2016. Consistent notes. Extremely complex on the nose with overwhelming aromas of blueberries, rich, deep, long and wonderfully structured on the palate. A fantastic tribute to the vintage.

Tasted in May 2012. Very truffy wine with lovely fruit intensity, elegant and supple, charming and tasty. Slightly dry on the finish. 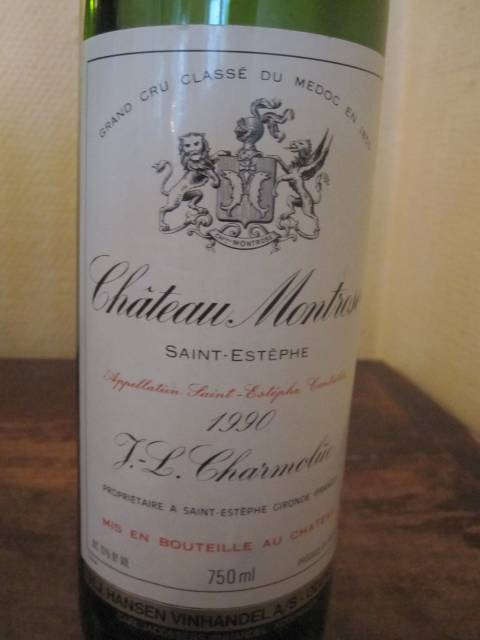 Tasted four times - last time in December 2016. Consistent notes from perfect bottles. Animal, concentrated truffles, incredibly thick intensity, then explosion of everything on the palate are sensational. This is a legend of perfection and phenomenal wine. Paradise in heaven!

Some history of making this vintage at Montrose. Bruno Lemoine (now at Larrivet Haut Brion) was technical director at Montrose at that time, and he decided to do an extensive green harvest during the summer of 1990. Jean-Luis Charmolüe, the owner, wasn't happy, constantly reminding Bruno Lemoine of a possible mistake by doing the green harvest. However, he stopped complaining when wine critics, led by wine-guru Robert Parker, praised this wine to the sky from the bottle with a perfect score of 100p!!

Tasted three times - last time in February 2020. Consistent notes. A significant graphite flavour is earthy and polished, well-structured with splendid complexity, velvety texture, and long finish. It was much better all three times I tasted it than reviews on this wine from other wine critics!

Tasted in September 1988 at the property. Very rich and graceful, with a lot of sweetness, extraordinary balance, and some age, entertaining stuff.

Tasted in September 1989 in a horizontal tasting of 25 wines from the 1959 vintage. This bottle didn't come from the cellars of the property. Incredibly well-composed, aromatic, the lovely sweetness of fruit, sophisticated, fantastic richness, power and length. Great, great bottle!

Tasted in March 1989. Came directly from the cellars of Montrose. Fat and compact, imposing depth and breed, astonishing length complexity and richness. A fantastic future is in sight!

Tasted twice - last time in September 2016. Consistent notes. Tasted for the first time in March 1989, the bottle came directly from the cellars of Montrose. Even better than 1955, with more intensity, complexity, and heart-breaking finesse and sweetness. Simply heavenly stuff. Then tasted again 27.5 years later, and the bottle was bought through an internet auction. It was a distinguished, classy and sophisticated wine with a lot of sweetness, excellent balance and riveting elegance. It's aged gracefully.

Tasted in December 2007. Here I became speechless. You name it, and a distinctive aroma of truffles and tobacco came from the glass. It was stunningly composed with exemplary, incredibly sophisticated and rarely seen complexity. An immensely rich aftertaste completed this perfect wine. Everything I love about Bordeaux was here! Montrose was particularly strong in the 1950s with magnificent 1953, 1955 and 1959, but this 55-year-old beauty ranks among the best wines of this vintage!