Power and elegance, richness and sophisticated touch, are here at highest level!

Chateau Lafite with lake, cellars and offices - pictured in April 2016

Lafite Rothschild is one of Bordeaux's five 1. Crus and situated most south of all three 1. Crus in Haut Medoc, just before the border of Pauillac and Saint-Estephe. It's on the left side of the road a few hundred meters after you pass the lieu-dit Le Pouyalet in the outskirts of Pauillac, and you notice a little lake in the front of cellars and chateau seen from the road.

The vineyard consists of three parts: the hillsides around the property, the Carruades plateau to the west and 4.5 hectares in neighbouring Saint Estèphe. There are 112 hectares with soil consisting of fine deep gravel mixed with sand on a limestone subsoil. The grape varieties planted are Cabernet Sauvignon (70%), Merlot (25%), Cabernet Franc (3%) and Petit Verdot (2%). The average age of vines used for Grand Vin is around 45 years old, and the oldest plot originates from 1886.

Lafite Rothschild is a magnificent wine with an incredibly flavoured nose when it gains some age. Cabernet Sauvignon rules here, so this wine can taste very backward and tannic when young, but you find incredible richness, depth, and awesome length in this wine with some age.

In January 2016, Charles Chevallier, Lafite's technical manager, retired, and his assistant, Eric Kohler, took over for many years. 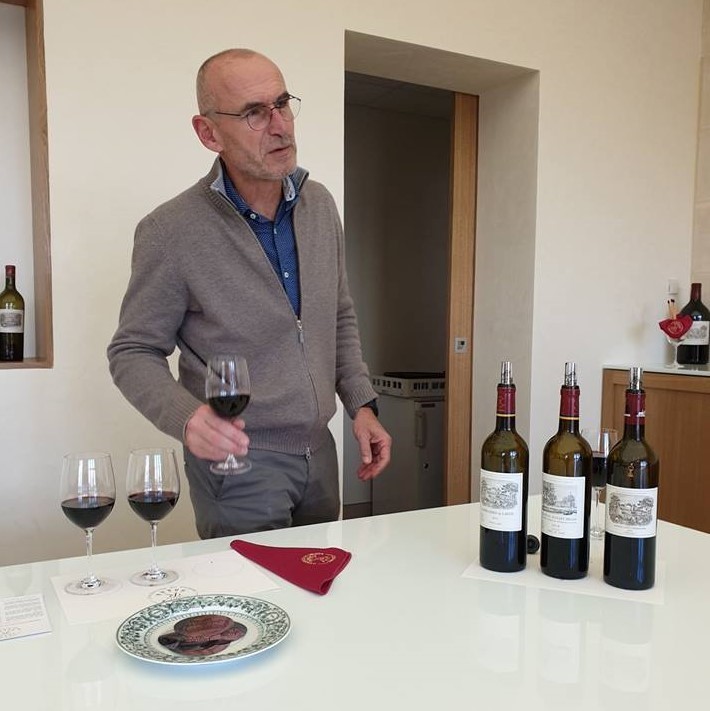 Tasted in April 2022. 96% C. Sauvignon, 3% Merlot, 1% P. Verdot. 12.6% alcohol. This wine had understandably many layers to rely on. Everything was great, from an aromatic nose of great intensity to an excellently structured palate with cashmere-like fruit and tannin, splendid midpalate and a long finish with excellent persistency. Tremendous effort!

Tasted in November 2021. 94% C. Sauvignon, 5% Merlot and 1% P. Verdot, 13% alcohol. Very classy blackcurrant nose, intense and refined. Awesome structure and length. The feel was like drinking liquid cashmere. So aristocratic and sophisticated on the palate with fantastic complexity and length. Eternal stuff! 99-100p.

Tasted twice - last time in April 2021. Consistent notes. 91% Cabernet Sauvignon, 8.5% Merlot and 0.5% Petit Verdot. Please note one thing here - the alcohol level stops at 13.6%! It was a monster of a wine, both powerful and elegant, incredibly aromatic on the nose, thick, dense, fat fruit and tannin, great structure and complexity, mega long finish. Ballerina moves. Undoubtedly one of the legendary wines in the 2018 vintage!

Tasted in April 2018. 96% Cabernet Sauvignon + 3.5% Merlot + 0.5% Petit Verdot. This property made a dense and polished wine with its trademark elegance and finesse, spiced up with richness and sophisticated touch. Fantastic stuff and one of the very best wines of the vintage.

Tasted three times - last time in April 2019. Consistent notes. 91% Cabernet Sauvignon + 8.5% Merlot + 0.5% Petit Verdot. Incredibly precise, refined and sophisticated, rich and complex, fabulous structure and length. Awesome effort. You'll not be able to find Lafite's striking elegance and finesse many places in Bordeaux! For sure, a legend in the making!

Tasted in April 2015 (87% Cabernet Sauvignon, 10% Merlot and 3% Cabernet Franc). Closed and oaky, but there are enough ingredients to turn this wine into a staggering one.

Tasted in April 2014. A significant graphite flavour (minerality), fine acidity, splendid structure and complexity, richness and great harmony between fruit and tannin. A gentle dose of new oak this time!

Tasted twice - last time in November 2015. Not consistent notes. Not impressive from the barrel when tasted in April 2013, painfully oaky, low-keyed and with a relatively short finish. I wondered if it would improve dramatically after ageing in oak and after bottling. It certainly did! Incredibly seductive wine! Intense and flavoured nose, sheer power and stunning length.

Tasted twice - last time in January 2020. This wine was strong and powerful, extremely tannic and concentrated, long and with an iron rock structure and mega long aftertaste. One of the best wines of the vintage. In January 2020 - 87% Cabernet Sauvignon + 13% Merlot. Very aromatically scented nose with a heavy dose of sophisticated touch. It is distinguished and incredibly complex, it sticks fast to the tongue, meaning it can be sliced, incredibly structured, and with a great long finish. Amazing stuff.

Tasted twice - last time in January 2017. Consistent notes. Tasted at the tasting of 9 bottles from a particular case from Duclot negociant (owns Petrus), Bordeaux Collection. Double decanted, served app. 5.5 hours later, different style than his closest rival, Mouton Rothschild. Remarkable finesse and elegance which this 1. Growth is so famous for the flavours of roasted bacon, cedarwood and tobacco leaves, extremely delicate, refined and extended. Perfectly composed wine, which undoubtedly will reach a perfect score in the coming years!

I tasted it in March 2009. Relatively backward and tannic but extremely promising, Excellent concentration and length. It needs time to reveal its secrets.

I tasted it in April 2008. Elegant style, lighter than usual, which is understandable because of the history of the vintage. Silky fruit and tannin, well-balanced and quite long finish. To drink before the big vintages are ready.

I tasted it in April 2007. An incredibly well-balanced wine with silky blackcurrants and silky tannin. It is refined and sophisticated with many nuances. Diametrally different from the super-concentrated 2005 version, but we still have a high class here.

Tasted twice - last time in May 2008. Dark red. This wine was immense. The first thing I noticed was a simply fantastic nose of perfectly ripe blackcurrants with incredibly aromatic fireworks. It showed an enormous power, length and aftertaste, and was silky everywhere. There were pure elegance and a pure sophisticated touch too. True and majestic 1. Growth par excellence!!

Tasted in April 2005. This was a real thrill. Sublime everywhere with a velvety texture, silky tannins, exquisite depth and structure, and great length. Racy and sophisticated. For sure, it can last for 20-25 years.

Tasted in April 2003. What a big range of nuances and what a fantastic aroma of leather, dark cherries and blueberries. Extremely sophisticated and with stunning depth. This wine is a knock-out! These notes are from April 2003. In April 2022, meaning 19 years later, this wine completely closed down and we have to wait and see if it opens again. In 5 or 10 years' time?

Tasted four times - last time in January 2020. Consistent notes. A legend and perfectionism at the phantom level. Here, one's senses worked at the highest gear to captivate all these fireworks of nuances this wine possesses. This wine is the true essence of Bordeaux – it's unique and not imitable. In full blossom in December 2016 - my bottle was purchased en primeur. Closed the "doors" entirely in January 2020 (ex-chateau bottle).

Tasted in September 2002. Pretty nose, full of flavours. Very elegant, refined and complex. A notable effort for the vintage.

Tasted in June 1998. It had very classy stuff (finesse, richness and length), incredibly complex and deep on the palate, beautifully constructed and with great length. Fantastic effort!

Tasted in November 2015. Powerful, deep and intense, with lots of fruit and tannin, perfect balance and a big meaty aftertaste. Not as distinguished as Mouton Rothschild tasted on the same flight, but who cares? Virile and still feeling young. Powerhouse! Many years to go.

Tasted in December 1990. Fantastically ripe and aromatic nose with finesse and sophisticated touch. Not a powerful wine, but rather an elegant one like a ballerina, and a very captivating wine. Fabulous effort.

Tasted in March 2019 during dinner at Domaine de Chevalier. Still keeping up well with time passing by with pure elegance, finesse and sophisticated touch. Captivating sweetness. Refined and with a velvety aftertaste. A tremendous and awesome treat to experience!

Tasted in May 2020. At first sip, it was purely evident that something superb from Pauillac waited for us in the glass. Well-preserved cherries on the nose and palate, acidity, perfectly supported fruit, pure elegance and sophisticated touch, great complexity, and lingering finish. Well-stored wine for sure. 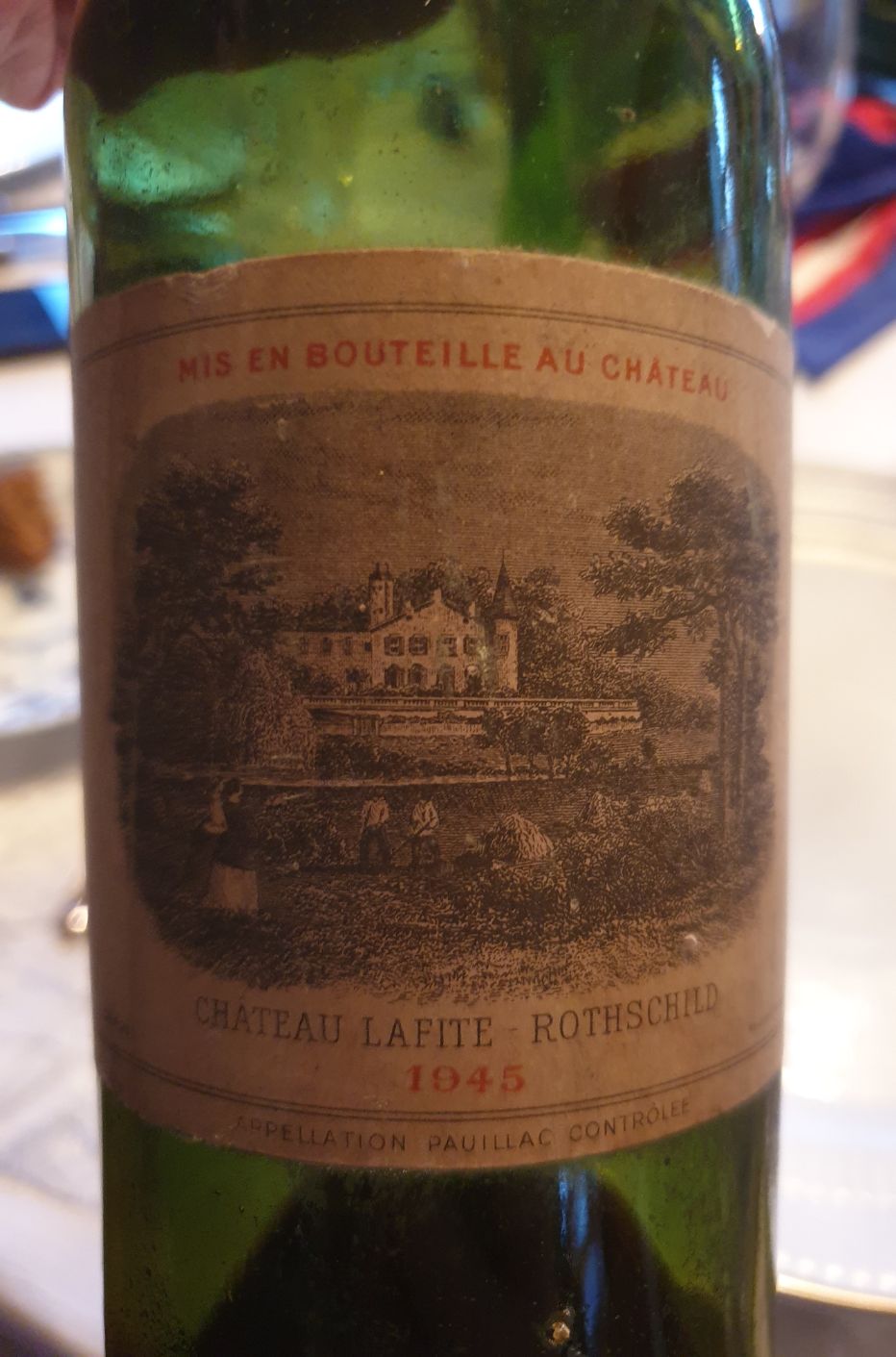 Tasted in April 2014 during dinner at Domaine de Chevalier. It was a blast from the past with an incredible nose of truffles, a truffy palate, riveting elegance, and remarkable complexity. Amazing wine.

Tasted in April 2018 during dinner at Domaine de Chevalier. Recorked at the chateau in 2001. An absolute blast from the past with an incredibly perfumed nose of truffles and cassis, incredibly classy on the palate with riveting elegance and remarkable complexity. Amazing 110 years old wine from a barely heralded vintage. 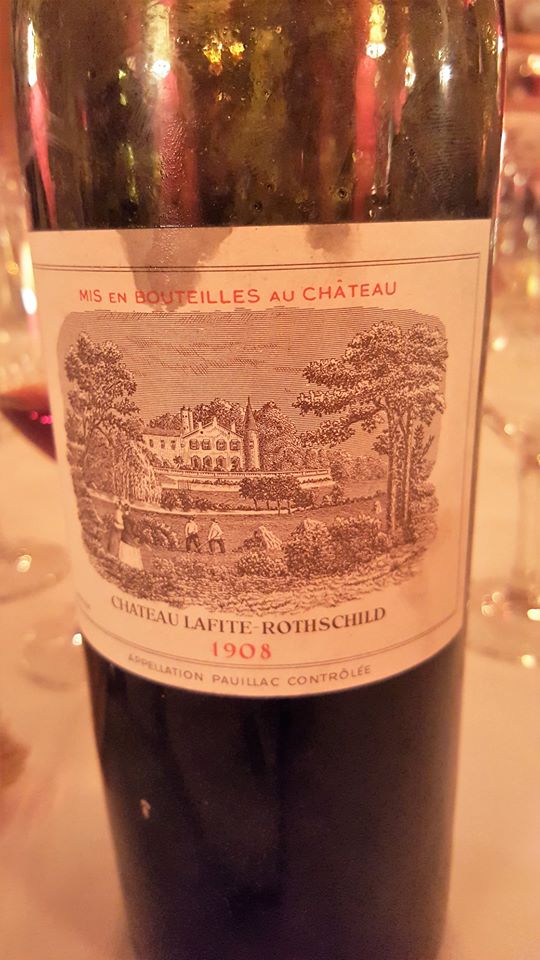