Always among the top wines in Saint Emilion 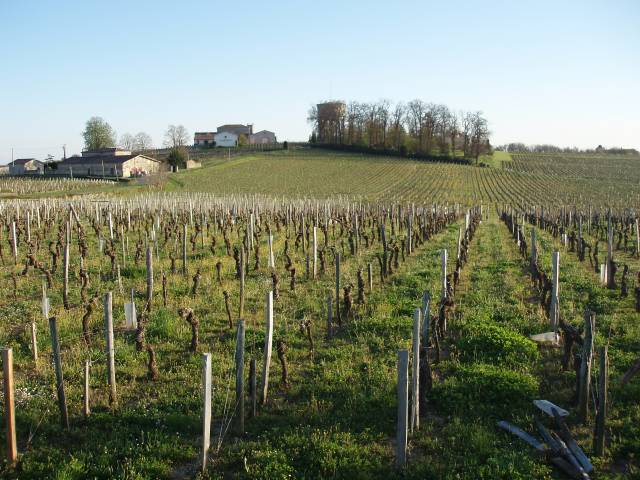 Troplong Mondot has contributed with wines of immensely fine quality since the 1988 vintage. One of the kindest, hospitable and gentle proprietors in Bordeaux, Christine Valette, had been responsible for Troplong Mondot's up rocketing quality. She sadly passed away on the 29th of March 2014.

This property and its vineyard are majestically situated on a small hilltop just outside Saint-Émilion town, reachable by few minutes in the car and app. 15-20 minutes of walk from the town's centre. You can't miss it, because of the water tower and very adequate signposting.

Troplong Mondot covers around 33 ha on soil with a deep clay surface and limestones in the subsoil, planted with 90% Merlot, 5% Cabernet Franc and 5% Cabernet Franc, vines are on average 35 years old and the wine matures in 75% new barrels for a period between 12 and 24 months.

Troplong Mondot houses an excellent restaurant, Les Belles Perdrix de Troplong Mondot, which is absolutely worth dining at in beautiful surroundings. I dined there with my three friends in the end of March 2015 and it was an exceptional evening. This restaurant is a sure must to eat when you are in Saint-Emilion! Because of a new owner, the restaurant was closed for a few years and has opened in different circumstances. Check out this property's website.

Tasted in January 2021. 85% Merlot, 13% Cabernet Franc and 2% Cabernet Franc. 2018 is the first vintage made by the new technical director, Aymeric de Gironde. He arrived at the property in October 2017 from Cos d'Estournel. At Cos d'Estournel, he significantly contributed to making the wine less extracted, fresher and adding more soil character. It seems the same now has happened for Troplong Mondot, which beforehand was a real punch "in your face". While tasted in January 2021, it offered a great, great nose of intense black cherries/blueberries, richness, seamless structure, grained tannin and creamy berries on the palate. A sublime effort, oozing of sheer class and sophisticated touch.

Tasted in April 2018. It had an intense nose of black fruit and a heavy dose of new oak in 2017. Maybe the most concentrated wine of all in Saint Emilion.

Tasted in April 2017. It drove at all cylinders, a lot of oak, ripe fruit and tannin, powerful and strong. The style here may not appeal to everybody, but it is really excellent wine.

Tasted in April 2016. I tasted the 2015 barrel sample here just before dinner at Les Belles Perdrix de Troplong Mondot. It was a powerhouse of a wine with an enormous concentration of fruit and tannin, fatness, chocolate flavour, added extraordinary complexity, depth and length. 96-97p. The degree of alcohol landed at a whole 15.5% but I'm not worried. Vines at the property produce usually grapes with high alcohol, it's naturally made and with time it will merge with fruit and tannin, and disappear. We have seen this many times before (in vintages 2000, 2005, 2009 and 2010). Grape varieties in 2015 - 90% Merlot, 8% Cabernet Sauvignon and 2% Cabernet Franc.

Tasted in March 2015. This wine was very concentrated and tannic, full-bodied, fine acidity, sweet fruit and tannin, superbly balanced and with great length. A fine effort for the vintage.

Tasted in April 2014. It had fruit on the verge of over-ripeness but there was enough freshness to balance the fruit. Fine structure, depth and length. This wine would have been better with more gentle winemaking.

Tasted twice - last time in April 2014. Consistent notes. This wine was very concentrated and tannic, full-bodied, sweet fruit and tannin, superbly balanced and with great length. A fine effort for the vintage.

Tasted three times - last time in April 2013. Consistent notes. Very intense nose of black cherries/kirsch, you can feel the alcohol on the nose and palate, a hefty dose of new oak balanced by perfectly ripe fruit, obvious modern style with a maximum of everything. A bit overdone. Long time runner – I believe it'll start to soften in ten years' time.

Tasted twice - last time in October 2009. Not consistent notes. In April 2009 it was strong and concentrated, but also very oaky and therefore very difficult to assess. Much better half a year later - reminds a lot of the 2006 version but has better ripeness of fruit.

Tasted four times - last time in April 2008. Consistent notes. I simply don't remember having tasted so complete and amazing wine from this property ever. Christine Valette has every reason to clap her hands! – her 2005 has a powerful aroma of dark berries, cocoa and chocolate powder, is multidimensional, incredibly well balanced and with rock-solid structure. Long-lasting and sensational wine. Wow!

Tasted in April 2005. The proprietor, Christine Valette, delivered once again a wine, which reflected her personality. Kind and strong at the same time. It was packed with ripe, aromatic and tasty berries. Stupendous wine.

This wine was clearly underperforming from the barrel in April 2004, but it showed dramatic improvement, when tasted in April 2006. Deep red, strong, tight with spicy blackcurrants and raspberries, fine balance and depth. Fresh attitude without any sign of overmatured grapes and dry tannin. A great vintage for the property.

Tasted twice - last time in August 2011. Consistent notes. Medium red. Seemed quite closed at the time of tasting, but you could feel there was potential. Give it time to develop and it will be full of charm, roundness and tasty flavours.

Tasted in April 2006. Black red. Incredibly aromatic with raspberries and cherries. Refined with pure elegance and finesse. A stunning sweetness of the fruit. This is a stunning vintage for the property.

Tasted in October 2006. Dark red. Strong and elegant at the same time with a fine aroma and taste of dark berries and cherries. A full-bodied, harmonious and very seductive wine. Fabulous quality. Magnum of same wine tasted in August 2011 - the same rating as for normal size bottle.

Tasted four times - last time in December 2016. Consistent notes. This wine is an extraordinary example of perfect, careful and intelligent winemaking! Very strong and powerful with incredible concentration, stunning depth and balance. Extremely long on the palate with a long-lasting aftertaste. Simply a killer wine, which still is extremely youthful at 15 years of age. I'm sure it can last for another 20-25 years. Tasted in December 2016 during a celebration of my 70th birthday, I toasted with this wine together with Olivier Bernard, while honouring the memory of late Christine Pariente, owner of Troplong Mondot, who died in March 2014.

Tasted in December 2016. Despite the low stand of this wine (C), it was very lively and vigorous, like well-trained 66 years old guy running a marathon! Very cherry, long and in perfect balance. Still many years to go.