Another vintage of the century is born? It's close!

I spent 10 days in Bordeaux between the 7th and 16th October 2009, visiting several chateaux and following harvest 2009 at several properties. Here are my impressions.

Warm and fresh weather today with few drops of rain. Harvest of Cabernet Sauvignon is ongoing.

First stop was Chateau Margaux and was lucky to have a few minutes talk with Paul Pontalier and get some fresh informations on 2009 harvest. Cabernet Sauvignon started on the 5th October and will finish next week. Today an excellent Petit Verdot was picked in parcel close to the chateau. Merlot was brought in with app. 14 degrees alcohol and C.S. is showing potentially 13 degrees. 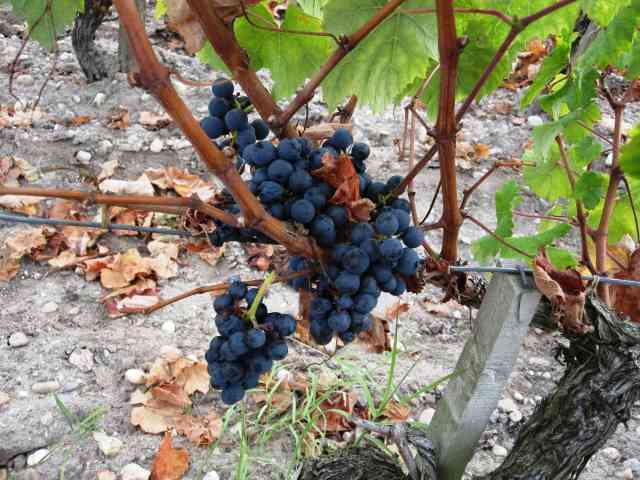 Paul Pontalier is extremely excited about 2009 and said that he's never experienced such an excellent weather condition while leaving in Bordeaux and working at Margaux.

2008 Margaux has put on weight and intensity but for the moment oak is quite marked. Needs to age more. There is a whole 87% CS in this wine. 2007 Margaux did show aromatic touch, roundness, light feet and elegance. 2006 Margaux is great classic wine for the property with its richness, intensity of flavours, excellent depth and length. Exceptional treat!

Next stop was Pichon Comtesse.

Director Gildas d'Ollone told me that he never has seen such optimal conditions with cool nights, ripe seeds and 27 mm of rain received at the best possible time for CC on the 19th September. Pichon Comtesse finished Merlot on the 22nd September, Petit Verdot (some vines are 77 years old but the average is 35 years) on the 28th September, Cabernet Franc on the 30th September and Cabernet Sauvignon between 1 and 7th October. The fact that Petit Verdot was ripe before the Cabernet family is simply extraordinary as this grape variety normally is the last one to be harvested. This makes 2009 vintage even more interesting when the blend is done.

2008 PC was fabulous and improved dramatically since March this year.

2006PC was strong, broad-shouldered and compact, but not typical for the estate, according to Gildas d'Ollone.

2005 PC is a tricky wine, a slow developer, it's gained more concentration and intensity since the last time I tasted it. Will be excellent in 4-6 years time. Absolutely not as bad as Robert Parker rates it. Gildas d'Ollone has message to Bob to come and retaste 2005 and 1990 as well.

Btw, Gildas d'Ollone said, That at PC, grapes seldomly reach high levels of alcohol compared to other properties. Explanation lies within the soil.

I also stopped by Cos d'Estournel and did see their impressive high tech vats. They will finish CS tomorrow. Palmer will finish with CS on Monday the 11th of October.

Today, I went to a place I always visit when in Bordeaux, Haut Brion and La Mission.

Turid Alcaras told me that Jean-Philippe Delmas is extremely satisfied with the quality of 2009 harvest and that he never has experienced such a healthy and ripe grapes and unbelievable excellent summer. He and his technical staff hope to make something really, really special, unforgettable and magnificent out of 2009 exceptional ingredients.

I was treated by 2008, 2007 and 2006 vintages in both colours from both properties. In Bordeaux, one always must taste reds before whites, as acidity in white wine would influence taste (edgy and dry) of tannin in red wine.

2008 HB red tasted even better than in March this year and is a strong candidate to be among two best 1. Growths in 2008. Big shoulders, immense depth, backbone, plenty of excellently ripe black cherries and stunning length and aftertaste. I'm happy to have bought a few bottles of this treasure.

2008 Haut Brion white competed with Laville, maybe not so affectionate and shining, but still showing a lot of depth, excellent acidity and intense flavours.

2007 versions of both wines were less flamboyant as 2008 versions but full of immense quality. Excellent treat.

Friday afternoon the 9th October I met Emmanuel Boidron, son of Jean-Nöel Boidron of Cantelauze (Pomerol) and Corbin Michotte (St.Emilion) fame. He was very, very satisfied with 2009 which he believes will surpass 2005.

In early morning hours, I took a train from Libourne to St.Emilion and my first stay was at the tasting room below the office of Jean-Luc Thunevin. During my walk from the station, a car stopped and surprise, surprise, Alain Vauthier from Ausone got out. I met him first time at Ausone in 1984!

He told me that he was extremely happy with 2009 vintage and that they will finish a small parcel of C.S. next day. According to him, there weren't any problems with fermentation at his other estates and that fermentation at Ausone will start very soon.

Since 2007 vintage is it Murielle who's responsible for the harvest at all estates managed by Jean-Luc Thunevin. You can say woman touch. In 2009 vintage potential alcohol in grapes is about one degree higher than in 2005 vintage. Concerning pH - it's 3.6 and lower than in 2005. Jean-Luc thinks that 2009 is a combination of 2005 richness and 1989 style. Harvest was at the time of my visit not yet finished for Cabernet.

2007 looked like a great success for the vintage with pretty nice fruit maturity, fine length and balance, quite intense with fine aromas of red berries on the nose.

2006 followed closely after 2008 with a strong attitude, chewy, complex and pretty well concentrated. Seemed to get out very well from the grip of oak and tannin. Another great success of the vintage.

2005 was quickly on the way to close totally down but let me just taste the fabulous richness and this outstanding maturity of wild black cherries. Exceptional stuff!

Then app. 1 km walk to Troplong Mondot. I was welcomed by Jean-Pierre Tayleson, cellar master of Troplong Mondot. He told me that since his first year at TM (1976), he never has seen such a combination of excellent quality of grapes and excellent weather. After 2005 vintage he thought that any future vintage wouldn't be better than 2005, but 2009 is a completely new experience for him. Merlot obtained between 14.8 and 15.8 degrees alcohol, while CS achieved sensational 14.4 degrees alcohol. He hoped to finish harvest of CS around 19-20th October.

2008 was completely drowned in tannin and oak during primeur week in April 2009, but 5 months later it did shed off most of it. Very intense and powerful on the nose, full-bodied, strong backbone, long and firm aftertaste. Great maturity of fruit and sheer class. Precise winemaking.

2007 showed aromatic and attractive aromas on the nose, Concentrated and quite intense for the vintage. Long aftertaste with a smooth and powerful touch. Great success for the vintage.

2006 was pretty close to 2008 in quality but a little less ripe in fruit. Very classy wine indeed!

2008 RdC was very powerful, strong, very intense on the nose with ripe flavours of blueberries and black cherries, with splendid balance and firm aftertaste. Terrific effort.

2005 RdC - it was a wine, which had amazingly aromatic fruit, fat but silky tannins, beautifully balanced, and which was incredibly tasty. Pure delicacy.

In the afternoon I went to Domaine de Chevalier. They hadn't yet finished their Cabernet Sauvignon, but expected to do it by the 15th October. There was extreme happiness about quality of grapes brought in and regarding white harvest, it looked like third excellent vintage in the row. 2009 white Bx may even exceed in quality trademark vintage 2002.

2008 D.d.Ch red - intense and aromatic on the nose with black cherries and blackcurrants, splendid depth and length, smooth aftertaste. Terrific effort for the vintage.

2007 D.d.Ch white – not so open like 2008, tighter and more floral/mineral, but with excellent acidity as well. Formidable wine.

Started with visit at Certan de May. It's winemaker, Jean-Luc Barreau, was extremely satisfied with the quality of harvested grapes and said 2009 would probably be better than 2005.

After Certan de May, next stop was Le Gay, where I met Argentinian winemaker at Catherine Pere-Verge properties, Marcello Pelleriti. He was pretty sure that 2009 vintage would be something really, really extraordinary.

I tasted 2008 Montviel, 2008 Le Gay and 2008 La Violette and all the three were as impressive as in March this year. Incredibly well-made wines. 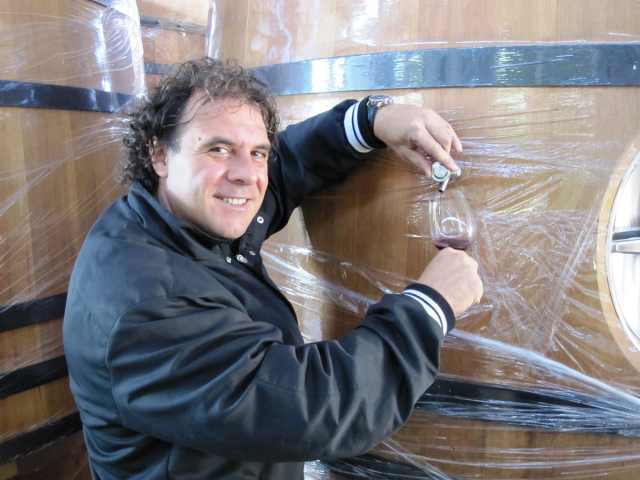 Same day just before midday I arrived at Château Corbin, GCC in Saint-Emilion. I've known its charming owner, Anabelle Cruse Bardinet since 1996. She's qualified oenologist from the University of Bordeaux in Talence. She bought Corbin in 1999 from her uncle after not being able to buy Château Certan Giraud (now Hosanna) in Pomerol. She finished vinification of 1998 vintage and 1999 vintage was her 100% maiden one.

She came with some very interesting comment about 2009 vintage. She said, that unlike 2005 vintage where maturity inside and outside grapes happened at the same time and in this way directed the style of this vintage, it was completely different with 2009 vintage where there was the huge time gap between these two maturity phases, due to water stress. In the weekend of 19th September, some 70-100 mm of rain fell during two downpours lasting 2 -3 hours. It did really kickstart phenolic ripeness.

Because of this huge gap, it's up to winemaker, which direction he/she will choose concerning style of 2009 vintage.

Normally, the harvest at Corbin takes 10 days, but in 2009 it will be 3 weeks, as she waited with harvesting Cabernet Franc until the 14th October in order to get the best possible maturity. She was pretty sure that 2009 would be the best vintage she's ever made at Corbin.

I tasted vintages from 2000 to 2008 and it was interesting to taste, that from 2004 vintage, the wine became more focused and precise. 2004 is slightly behind the best vintage yet for Corbin, 2005, but even 2007 and 2006 offered excellent quality for money. 2008 tasted very promising with attractive berry fruit, splendid concentration and long aftertaste. 2000 and 2001 were pretty wines but lacked somewhat identity and intensity of recent vintages.

Next day, before going to Sauternes and Barsac, I made quick visits to La Conseillante and Lafleur. Same story here about excitement about the quality of 2009. 2008 wine from both properties continued their excellent development.

It was all sweet that day - Nairac, Climens and Raymond Lafon.

At Nairac, Nicolas Tari Heeter, the winemaker, was really thrilled by the quality of botrytised grapes he's harvested. From the plot of Semillon close to the property, he obtained must containing app. 30 degrees potential alcohol, while remaining plots of Semillon gave 23-24 degrees potential alcohol. He added that it was purest botrytised flavours he's ever experienced (since 1992).

2008 Nairac – tasted from different barrels – looking as terrific as during primeur week this year. Very grapefruity, intense and deep with fine acidity. 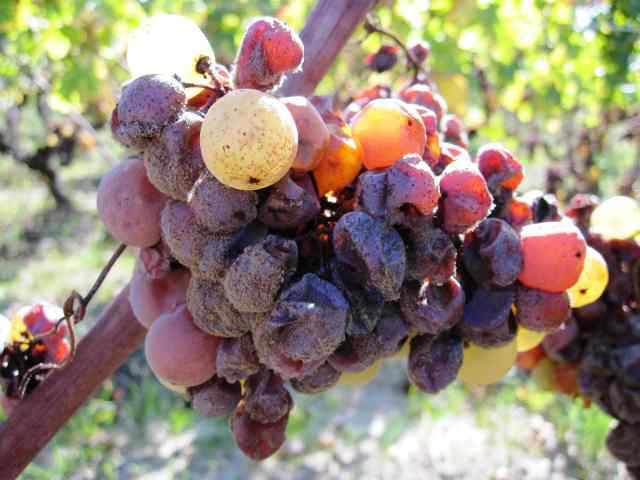 Next stop was Climens, where harvest was finished and the workers did clean the vineyard. Berenice Lurton was all in a smile and sheer happiness. Harvest started on the 20th September and continued for 15 days. They've done 95% of the harvest from 1st tri, which has never happened in Climens before!

2008 Climens – from several barrels and blended lots. Very much like in April 2009 and everything more integrated. Fabulous showing of breathtaking elegance, purity and wonderful balance.

2006 Climens – strong botytrised aromas of orange peel, candied oranges, elegant and sophisticated. Not as complex as 2007, but quality here is stupendous.

Last visit took place at Raymond Lafon and Jean-Pierre Meslier told me this vintage will be something really, really special and extraordinary. The harvest was not yet finished. 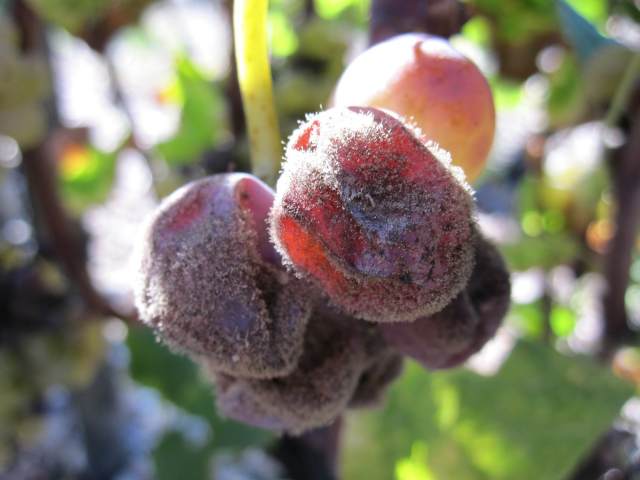 1. I spent two weeks in Bordeaux from mid-April to check out the 2021 vintage from the barrel. A review of 300+ tasted barrel samples has just been published on the 23rd of June 2022.

4. Tasting notes concerning the 2018 vintage on wines tasted from the bottle in Bordeaux in November 2021- chapter "2018 IN BOTTLE" in "VINTAGES".

5. The Burgundy blog in the News chapter is a new feature, including impressions from Burgundy tastings/tasting dinners attended since November 2018. It'll also have impressions on tasted wines from Beaujolais' best winegrowers. I explored this wine area in April 2022 while tasting Morgon Cote du Puy from five producers in 2018 and 2019. A tasting of top cuveés from the same producers will follow in June 2022.

6. In addition to my website, I also post tasting notes to an excellent website run by Pekka Nuikki from Finland, www.tastingbook.com, where I have 11.000+ followers and 2.850+ TNs by mid-June 2022.