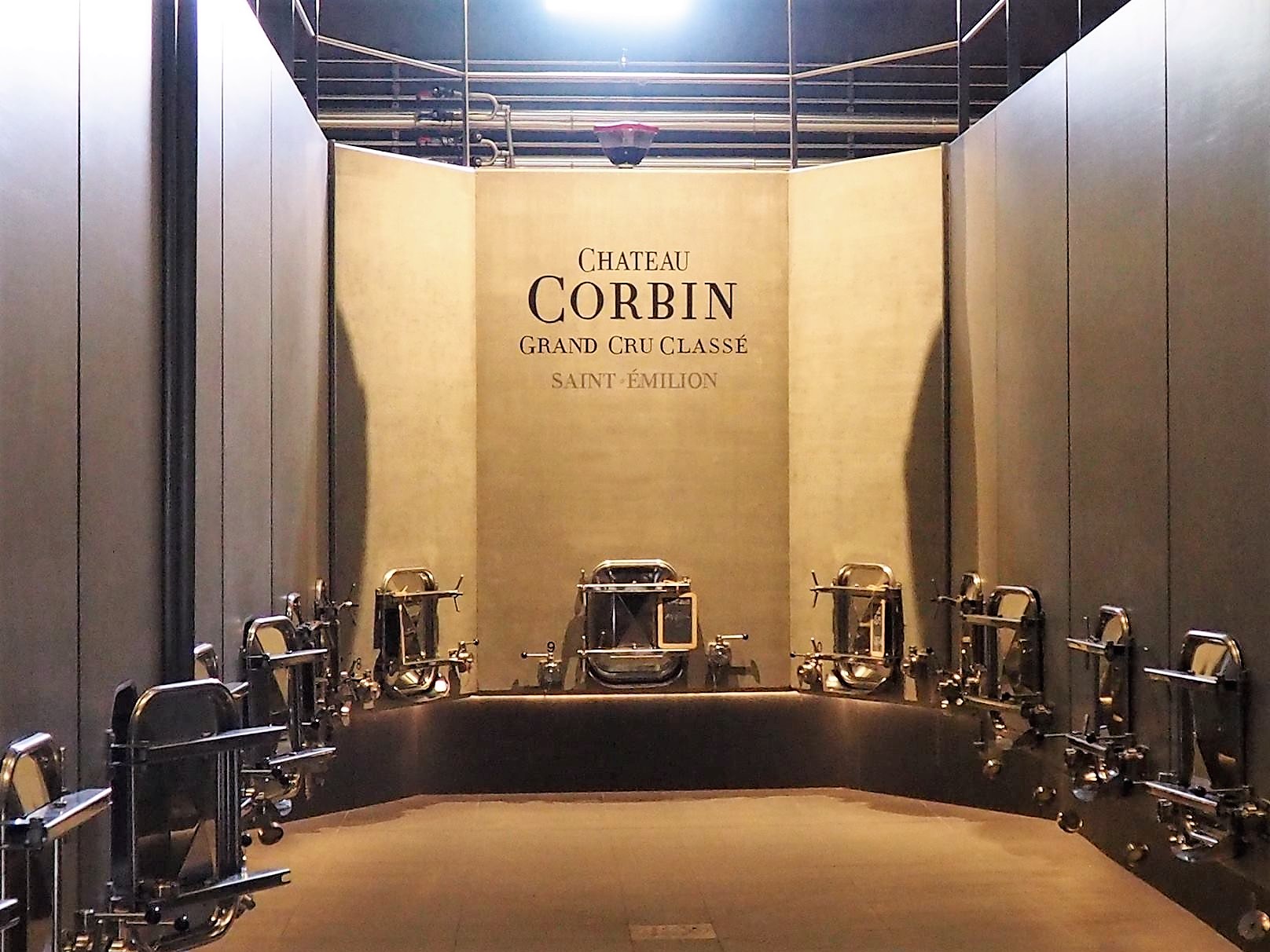 I met the present owner, Anabelle Cruse Bardinet, for the first time in May 1996 at Chateau Grand Corbin. According to my appointment, I should wait there to be driven to Chateau Certan Giraud, owned like Corbin by Domaines Giraud.

Anabelle had just landed at Certan Giraud after finishing full oenology studies at wine university in Talence (Michel Rolland's class), working at several wineries around the world and helping famous Mother Theresa during one year. At Certan Giraud, she took care of the vineyard and promoting things, while her nephew Emmanuel made wine. Two years later (1998), Certan Giraud was sold to Christian Mouiex.

Corbin was acquired by Giraud family in 1920s. In 1999, her uncle, Philippe Giraud, put it for sale. Anabelle Cruse Bardinet had allied her with her two sisters and the trio bought the property. Several years after purchase, she's become the sole owner. She finished vinification of 1998 vintage and started cleaning and replantation of the vineyard, modernisation of chateau and cellars. In July 2016, a new cellar with stainless steel vats has been revealed.

Corbin is situated in the hamlet (lieu-dit) of Corbin, some 2 km west for Catusseau and borders Pomerol. Neighbours to Corbin are Grand Corbin Despagne, Corbin Michotte and Grand Corbin. There are 13 has of vines, planted with 80% Merlot and 20% Cabernet Franc, vines are on average 30 years old. Soil is both sand on a layer of clay and iron clay one.

Anabelle Cruse Bardinet makes very stylish wine at Corbin, true St.Emilion one, pretty wine with a lot of elegance, finesse and precision. Never overblown wines, over-extracted and overpowered with tannin. Since 2006 she's worked with oenologist Jean-Philippe Fort, associated with Michel Rolland and this cooperation's pushed Corbin higher up in quality level. Imho she's started to steer Corbin in the direction she wanted with vintage 2005. It's worth mentioning, that Corbin is very reasonably priced too!

Tasted in June 2020. 90% Merlot + 10% Cabernet Franc. A distinctive and classy nose of sweet black cherries and blueberries with fabulous elegance and finesse, vibrant, many layers, sophisticated with high complexity. Silky and velvety. It's such a riveting and stylish effort! Will it pass 2018 on the finish line? I believe so!

Tasted in April 2019.  Big, fleshy, corpulent wine with striking complexity, structure and long persistent finish. I could taste a slight change of style here towards more concentration and more vibrancy here than before. Probably the best vintage ever for the owner, Anabelle Cruse Bardinet. Whopping 15% alcohol here, but it's completely "eaten" by fat fruit and frankly said, you can't feel the alcohol!!

Tasted twice - last time in April 2019. Consistent notes. This wine was an excellent thrill! New cellar with vats for each parcel was ready for 2016 harvest and allowed much more precise and individual vinification in that vintage. This wine had great aromas of violets and blueberries, very subtle and distinguished, great complexity and balance, great precision, elegance and finesse.

Tasted twice - last time in April 2019. Not consistent notes. Grand Vin represents 90% of the whole production. It was powerful and concentrated with silky fruit and tannin, aromatic and well-balanced, distinguished and very complex. A stupendous effort for the vintage. This wine was somewhat diffused in April 2019, but I think it was a faulty bottle.

Tasted in April 2014. Anabelle Cruse Bardinet was satisfied with her 2013 but said the making of this vintage wasn't for faint-hearted. This wine had a fruity nose of cherries and raspberries, freshness, some minerality, silky tannin, good balance and soft finish. Very good effort.

Tasted three times - last time in April 2015. Consistent notes. This wine seduces the audience with violets and black fruit, elegance, well-integrated tannins and silky finish. Light-footed but a fine effort for the vintage.

Tasted three times last time in April 2015. Consistent notes. Deeper and more concentrated than 2012, longer on the palate. Tannin is a bit coarse here but it will integrate with fruit later on.

Tasted in October 2009. Attractive on the nose, round with ripe (!) fruit, well-balanced with fine concentration and depth. Very enjoyable but I don't think it will pass 10 years mark like that.

Tasted in October 2009. Similar to 2007, slightly more concentrated and with a slightly longer finish.

Tasted in October 2009. Slightly warm fruit on the nose but the wine is just fine. Elegant stuff with bite and round aftertaste.

Tasted in October 2009. The nice intensity of raspberries and cherries, pretty wine, elegant, charming and round.

Tasted five times - last time in April 2011. Consistent notes. Quite light, soft, round and charming. Past its prime.

Tasted in October 2020. A very elegant wine with great finesse and style. Delicate. Great complexity and silky fruit/tannin. I've tasted 1945 and 1959 from this property in the last 5 months and I can easily find the same terroir characteristics and style of wine in 1964 too. A true delicacy to taste!

Tasted in May 2020. A blast from the past! You simply don't come across such a fabulous and well-stored bottle too often. Young in colour and appearance, unbelievable! Dignified cherry nose and sleek on the palate, sophisticated with great balance and sheer elegance. Great intensity of flavours. Smooth and lingering finish. 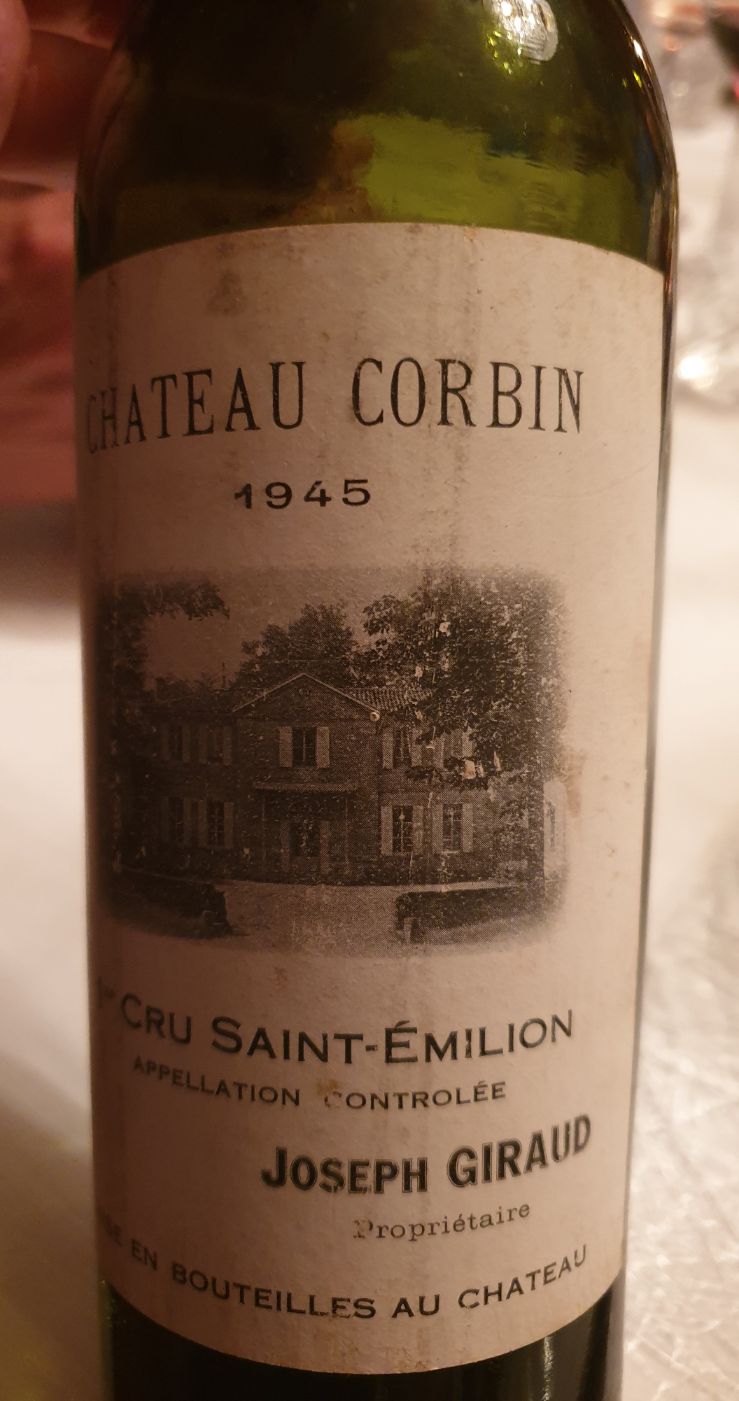