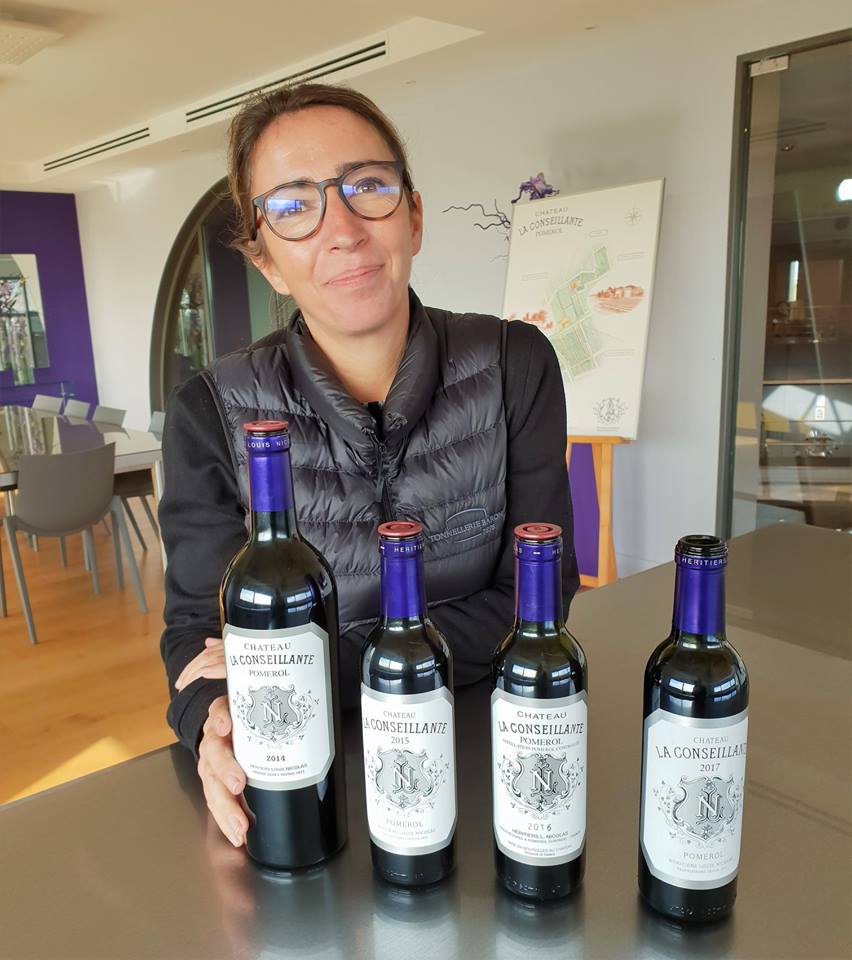 Mini-vertical with Marielle Cazaux in October 2018

Tasted in May 2021. 87% Merlot + 13% Cabernet Franc. 14% alcohol. Dense nose of winter black truffle and violets. I found out it had a more tannic structure on the palate than usual, but finesse and elegance were still there with great complexity and sophisticated touch. Excellent precision and tremendous length. Utterly impressive stuff from the winemaker, Marielle Cazaux. Wow!

Tasted in June 2020. 84% Merlot + 16% Cabernet Franc, 14.5% alcohol. Marielle Cazaux, the winemaker, used a technique called "debourbage" during maceration, which separates clear juice and solids, so the only clear juice comes back to the vat/barrel. Freshness, complexity, sophisticated and rich. Very blueberry and black cherry. Velvety fruit and tannin. Awesome structure, elegance and impressive length. It seems to me there is more precision in 2019 than in 2018 and more typicity of Pomerol. Stunning effort.

Tasted four times - last time in November 2021. Not consistent notes. Tricky barrel sample in April 2018 to taste, and it didn't help by far too many people gathering in LC's cellar on the first day of primeur tasting. Retasted in September and October 2018, it showed a lot of elegance and finesse, excellent length, and complexity. Great Pomerol style here.

Tasted three times - last time in November 2021. Not consistent notes. Not quite as exciting as expected while tasted at the property in April 2016. The barrel sample lacked freshness and had a touch of overripe flavours. Much, much more convincing in October 2018. Sweet, silky texture, 14.5% alcohol, but you can't feel it, a lot of elegance and finesse. Great complexity and catchy style. Even better in November 2021, with a lot of grace and finesse, great complexity and catchy style.

Tasted three times - last time in November 2021. Consistent notes. Has more Cabernet Franc in the blend (22%) than other vintages (15-18%). A very sophisticated and refined wine, exquisite and with a lot of finesse and style.

Tasted in April 2013. Sophisticated and refined with high intensity of black cherries, lush and exquisite, velvety texture, excellent balance and long smooth aftertaste. Great effort for the vintage. In March 2014, it tasted weak, less intense, less structured and tired, probably because of transferring wine to vats before bottling.

Tasted in March 2009. This wine appeared velvety and aromatic all over, pure elegance and sophisticated touch so typical for this property, long and graceful finish. Entertaining stuff.

Tasted in March 2014. Quite evolved with slightly jammy flavours. Light texture. Merlot wasn't a revelation in this vintage, and it's obvious to taste. I think this wine is speeding up in maturity very fast. Nice and charming.

Tasted in November 2021 from magnum. It revealed some green notes on the nose, but I believe they belonged to Cabernet Franc, and they weren't unripe flavours. The fruit was a bit warm, but overall, this wine displayed fine fruit intensity, splendid structure and a meaty finish.

Tasted in November 2019. A scent of truffles on the nose, well-balanced, finesse and elegance, well-defined and with a lingering finish. Lovely wine.

Tasted in April 2011. Negociant bottling and an impressive reminder from the past. It showed a remarkable similarity in style in recent vintages - sublime, sophisticated, great finesse and elegance. Just stunning.