Very classic and stylish Pomerol which reflects its soil 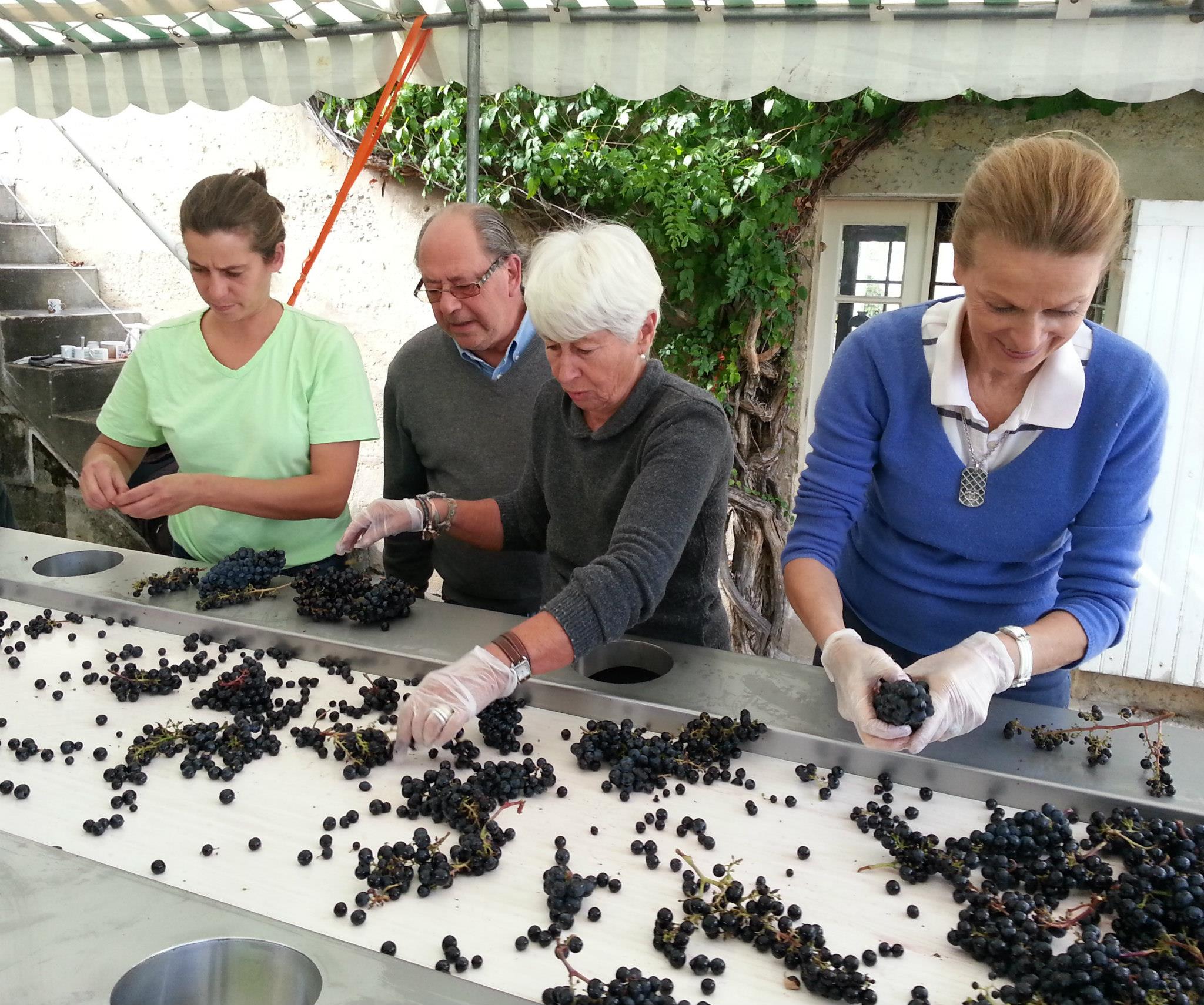 Sorting table: Bourgneuf on October 1, 2012; Merlot grapes from a parcel near Trotanoy. From left to right: Frederique Vayron, Xavier Vayron, a worker from the sorting staff, and Dominique Vayron.

Bourgneuf is situated just behind the famous Trotanoy. It's been run by Dominique and Xavier Vayron for many years. In 2008, their daughter, Frederique, stepped in as winemaker. Until the 2009 vintage, Bourgneuf was a traditional Pomerol with many tannins and a backward appearance. Frederique's main goal was to give Bourgneuf grapes more roundness, softness, ripeness, and sweetness by picking them later, choosing more, and making the wine more gently. She also wanted the wine to be more precise and focused. It's genuinely succeeded! 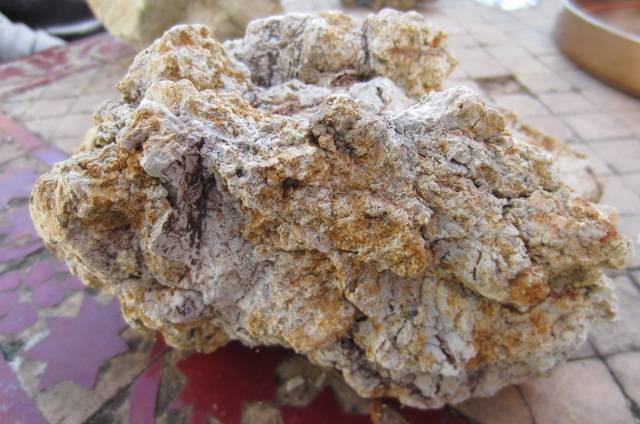 Crasse de fer from the soil of Bourgneuf It's iron dirt, or stoned, firm yellow clay containing iron oxide (brown spots). This is the famous soil of Pomerol!

tasted twice, the last time in April 2022. Consistent notes. 85% Merlot + 15% C. Franc. floral, aromatic, elegant with velvety tannin, juicy, delicate with finesse, fine structure, and a lingering finish. It's lighter than the last three vintages, which makes sense, but the winemaker did a great job with this difficult vintage.

Tasted in May 2021. 85% Merlot + 15% Cabernet Franc. 14.8% alcohol. On the nose, intense blueberries and raspberries with a hint of black truffle, luscious dark berries on the palate, well supported by fine-grained tannin. Freshness, vibrancy, delicate complexity, and long finish Great focus and precision here! Honestly, this is the best vintage ever produced by the winemaker, Frederique Vayron! Bravo!

tasted twice, the last time in November 2021. Consistent notes. 80% Merlot + 20% Cabernet Franc, 14.5% alcohol, lots of violets on the nose with blueberries and black cherries, very distinctive and noble. It's refined, with striking complexity and harmony between creamy berries and sweet-grained tannins on the palate. The finish is long and lingering. A stunning effort from the very talented winemaker, Frederique Vayron!

tasted four times, the last time in November 2021. Consistent notes. 80% Merlot + 20% Cabernet Franc. With creamy fruit, finesse, chocolate flavors, velvety body, complexity, and a fat fruity finish, this wine is more elegant than powerful. Splendid effort. This was in April 2019. Six months later, it put on weight and tasted more concentrated, complex, and lengthy. In January 2021, this wine showed intense blueberries and raspberries on the nose with a black truffle touch and creamy berries on the palate, well supported by velvety tannin. power, elegance, and finesse combined with splendid complexity for a long and meaty finish. So classy, Pomerol! This wine appeared similarly in November 2021!

Tasted four times - last time in November 2021. Consistent notes. This property made a seductive wine with delicate elegance, charm, silky fruit, tannin, and a fine fruity finish. Delicate, stylish and with much finesse.

Tasted seven times - the last time in April 2019. Consistent notes. Gorgeous and aromatic wine. Great complexity and smooth, fruity finish. There were plenty of violets and blackberries, as is typical of Pomerol. A very dense, tight body with a strong backbone and a long finish. Great effort for the vintage, and I'm sure of the excellent evolution of this wine in the coming years. 34 hl/ha.

Tasted three times - last time in April 2018. Consistent notes. Mineral, fine acidity, black and red fruit, fresh and lively, precise winemaking. Lighter than 2012 and a bit short on the palate. After bottling, there's little to be excited about. Light, charming, round and short on the palate. Immediate consumption is recommended.

Tasted seven times, the most recent being in October 2015. Consistent notes. From the barrel, it gave an impression of highly well-made wine - very, very captivating aroma of crushed black cherries mixed with cocoa and grated chocolate, strong and refined on the palate, finesse, great length and formidable finish. Among the best wines in Pomerol this year! I lost a bit of baby fat after bottling, but I don't complain - this wine is just excellent for the vintage. In March 2014, it was closed, tannic and not giving much from itself. Still, it had enough potential. Woke up again in March 2015 - splendid wine. Also spectacular in October 2015.

Tasted nine times - last time in October 2017. Consistent notes. Already out of the barrel, it performed fabulously. Chocolate and truffles on the nose, strong structure, great depth, richness, and a strong backbone, packed with black cherries and fat tannin on the palate. Extremely well-made wine. While tasted in March 2012, also from the barrel, it didn't lose anything of its spectacular performance from one year before. In September 2012, I tasted it from the bottle, and it was a breathtaking experience. This wine showed even more intensity and concentration than six months before. Wine that is both intimidating and exciting! In April 2013, this wine refused to "speak," and it was closed. In September 2013, it opened the floodgates again. A thick aroma of black fruit, alcohol evident on the nose but not abusive or interfering, well-crafted, strong structure, beautiful balance, and powerful tannin need to age. What a lovely wine!

Still beautiful in October 2015! In April 2016, this wine was fat, very concentrated, with great depth, structure, and complexity. There is a lot of terroir on the palate here, a lot of nuances, and a persistent finish. This is imho undoubtedly the best vintage ever at Bourgneuf since present winemaker Frederique Vayron took over from his father in 2008. In October 2017, this wine was a monster, like an iron fist in the velvet glove. During my visit in October 2017 to the property, Frederique revealed that the yield in 2010 was as low as 22 hl/ha. This explains the fatness and impressive concentration, intensity and length of Bourgneuf!

It tasted seven times - last time in September 2013. Consistent notes. This wine had great intensity of sweet black cherries on the nose, chocolate flavour, fat ripe tannin, great balance, seamless structure, depth and long, intense, fruity finish. Great effort for the vintage and with Frederique's clear stamp on it. It tasted a bit closed in April 2013, but its great potential is imho indisputable. This wine, too, opened floodgates again when tasted in September 2013 - it was almost a copy of 2010 with the same quality and style. Alcohol wasn't that evident, but tannin seemed a tad less ripe at the time of tasting than in 2010. Great future here.

This wine is the first vintage made by Frederique Vayron with the help of her father. Tasted six times - last time in October 2017. Consistent notes. It appeared tight and backward with splendid concentration, well-balanced, mineral, long and nuanced. Cool style. Superb effort for the vintage.

Tasted twice - last time in March 2012. Consistent notes. This wine had a hint of cocoa powder, truffles, light and not precisely ripe fruit, round and with good grip. Pleasant to drink already.

Tasted twice - last time in April 2013. Consistent notes. Backward, less concentrated than in 2005 and fruit not that ripe like in 2005.

Tasted in March 2012. This wine was a great surprise and confirmed that in the 2003 vintage, where many properties in Pomerol made uninspired wines, and some even hadn't found their wines worthy of putting a label on, you still could see some spectacular wines. And this spectacular was the case with the 2003 Bourgneuf Vayron. Very much truffle aroma on the nose, captivating and delicate, supple and velvety on the palate with lovely elegance, complexity and caressing aftertaste. There is no sign of excessive hot fruit and liquorice flavours typical for the vintage.

Tasted twice - last time in September 2012. Consistent notes As impressive as 2000 vintage! Same traditional but classic style with strong structure and firm tannins. A great future is expected as well.

Tasted four times - last time in March 2014. Consistent notes. Excellent wine in all aspects. Potent, meaty, concentrated and with a lot of perfectly ripe blackberries, blueberries and cherries. You also taste the subsoil here - "crasse de fer" (iron dirt). Great future. I remember being at Bourgneuf in September 2000 and looking at Xavier Vayron, who held a measuring cylinder with black-coloured must and looked like saying - "I've something excellent and special here!"

Tasted in March 2012. This wine displayed violets was metallic with quite ripe fruit, light, round with no edgy corners. Very drinkable now.

Tasted in April 2010. Real "vin de garde". Still tight and closed after almost 12 years. It hasn't opened the gates yet, and I believe in 4-5 years, it'll become "available". 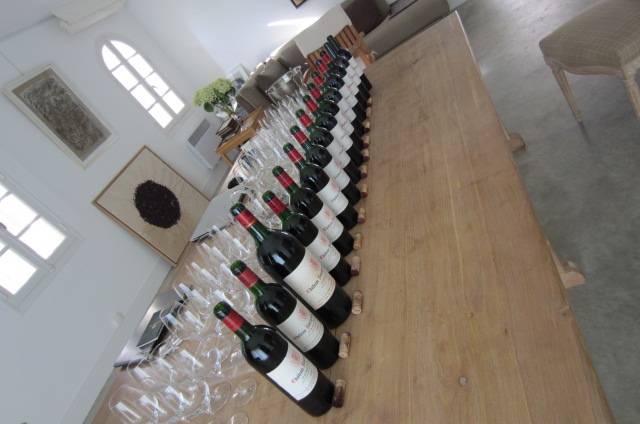 All bottles for tasting lined up in March 2012

Tasted twice - last time in December 2012. Consistent notes. This wine had a splendid and intense nose of truffles and black cherries, fine acidity and tannins, finished well with a meaty and smooth aftertaste. Long-lived wine. A fine effort here for the vintage.

Tasted in March 2012 from magnum. Similar to 1989 with more concentration and length. Splendid wine indeed.

Tasted three times - last time in March 2012. Consistent notes. Low yield - only 32 hl/ha. A perfect example of mature Pomerol wine. Truffles, perfect maturity, incredibly elegant, sophisticated, and lots of finesse. A beautifully balanced wine which can keep for ten more years. Awesome treat. In March 2012, during the vertical of 15 vintages of Bourgneuf, the first bottle tasted considerably older than the previous one, but the second one was like I remembered it. These two bottles tasted in March 2012 and didn't come from Bourgneuf cellar - they were bought from other sources. Rating is based on the best bottle.

A funny story about 1985 Bourgneuf Vayron - Jean Claude Berrouet (J-P.Moueix' winemaker - now retired) presented this wine blind for students at wine university Bordeaux a majority of them wrote in their comments how well-integrated fruit was with oak in this wine. Their faces turned red when Jean-Claude Berrouet told them that this wine had never seen oak during vinification...!

Tasted twice - last time in September 2012. Consistent notes. Ten years older than the excellent 1985, you can't complain about this wine, which was a perfectly mature bottle. Lighter and less intensity than 1985, but delicate, delicious, splendid balance, splendid structure, and caressing finish with fine acidity keep this wine together. Thirty-seven years old wine at its very peak, and it's just delicious. This bottle was purchased from a fine source in Copenhagen in September 2012 and tasted one week later. I retasted this wine at the property (bottle coming from Bourgneuf's cellar) one week later, and it was a bit older on the nose and palate than "my" bottle.