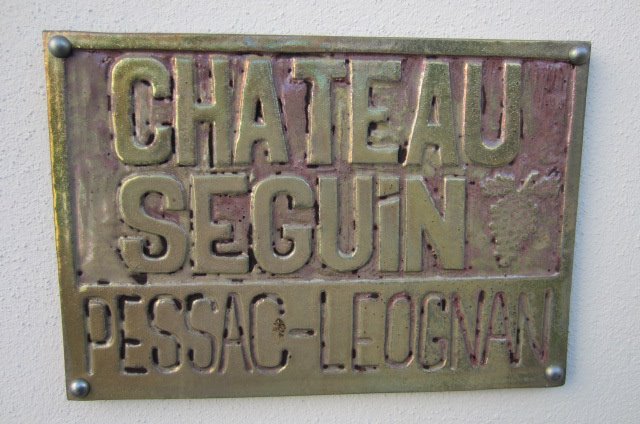 Chateau Seguin isn't a property that steals headlines, although Robert Parker gave it 91-93 in vintage 2009, and Swiss wine critic Rene Gabriel loves it.

Seguin is situated in Canejan village close to Pessac. Its appellation is Pessac-Leognan. Darriet family has owned it since 1987, and the man in charge is now Denis Darriet, who, before coming to Seguin, worked in Paris as a jeweller for famous jewellery makers like f.i. Cartier and made exclusive creations for the most known celebrities in the world.

During my first visit to the property in September 2010, I became very impressed with the wines when I participated in a press trip for wine journalists in the district organised by Graves(Pessac-Leognan syndicates. I stayed through the whole trip at Seguin.

Then in March 2011, I had a vertical there from vintage 2004 to 2010. I must admit I was left breathless while tasting 2010. It was an outstanding, if not sensational, performance. Unforgettable visit. Visits in September 2011, March and September 2012/2013, April and September 2014, March 2015 and October 2015, April and October 2016/2017/2018 have just confirmed the excellent quality Seguin possesses today. It seems like Denis Darriet has transferred his skills and dedication from making very costly jewellery to his wines! 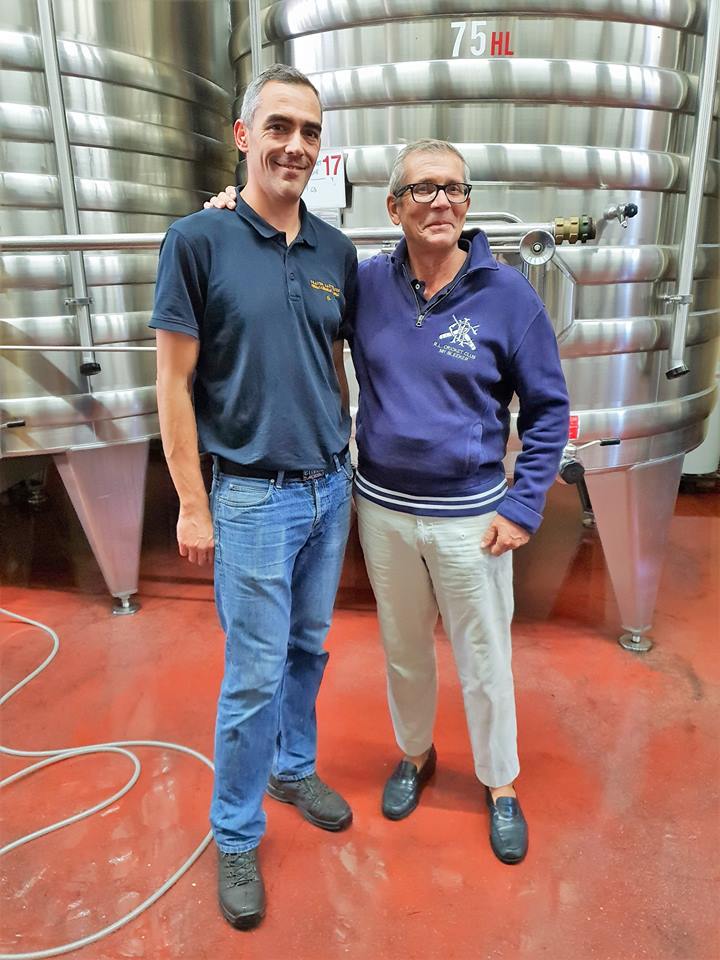 Denis Darriet (right), owner of Seguin, is in the cellar with his winemaker, Xavier. October 2018

Tasted in June 2020. 55% Merlot + 45% Cabernet Sauvignon. It starts quite friendly and attractive with delicate aromatics on the nose with violet, mint and cherries. A little touch of heat/alcohol on the nose disappears rapidly. Silky on the palate with superb balance and a gentle kiss of oak, long and firm finish. It's simply a great effort, and for me, 2019 here looks like a mix of 2018 and 2016 with the latter's elegance and nobility.

Tasted twice - last time in December 2020. This property came back with a vengeance in 2018!! Very scented and aromatic nose of blueberries, rich, great complexity and length, elegant and refined. Impressive stuff.

Tasted five times - last time in October 2017. Consistent notes. Impressive nose of violets and black fruit, splendid acidity, well-balanced, excellent structure and length. Long finish. It is a remarkable effort for the vintage and exciting wine from a calm and quiet vintage. It's a long keeper.

Tasted twice - last time in March 2015. Consistent notes. Flowery on the nose with fine acidity and delicate structure, it seems lighter than 2012. Mineral and well-balanced. Excellent effort in this troubled vintage.

Tasted ten times - last time in October 2017. Consistent notes. This wine's been keeping me thrilled since its berth. To have such a fabulous nose of black cherries and so intense silky black fruit on the palate, combined with stunning balance and complexity, it's just a great moment. It's undoubtedly the best wine this property has ever made and a fantastic achievement. Wow! In March 2014, this wine did throw its "baby fat" away and became quite tannic and closed. In September 2015, it opened up once again. Thrill to taste!! In October 2017, it displayed a beautiful cherry nose and was tightly crafted, powerful with great complexity and structure, excellent acidity and length. The best vintage for Seguin ever by any means - stunning effort!

Tasted ten times - last time in October 2017. Consistent notes. A very intense wine with gobs of blackberries, black cherries, exquisite balance, finesse and elegance, and sophisticated touch. Beautiful, classy wine and great effort indeed. It was closed while tasted in March 2014 but seduced with open arms in September 2014. In October 2017, it tasted lighter and was that seductive as before. Closed phase?

Tasted five times - last time in March 2016. Consistent notes. Not as striking as 2009, but there's nothing to complain about. This wine was mineral, multifaceted, well constructed and structured, massive on the palate and with a sophisticated touch. A fine effort for the vintage.

Tasted in March 2011. Very attractive on the nose, well-knitted, elegant and with a firm finish. Nice effort.

Tasted three times - last time in September 2015. Consistent notes. This wine was made by the previous winemaker than the present one, Xavier, who arrived in 2007. Still, you feel the soil and what nature gave to the winemaker. This vintage was one of the easiest to make for many reasons. It had an aromatic nose of beautiful sweet cherries, great complexity and stunning length. Riveting stuff!

Tasted three times - last time in March 2015. Consistent notes. This luxury cuvee made from old vines was more profound and had a longer finish than regular cuvee. Imposing and stunning wine.

1. I spent two weeks in Bordeaux from mid-April to check out the 2021 vintage from the barrel. A review of 300+ tasted barrel samples has just been published on the 23rd of June 2022.

4. Tasting notes concerning the 2018 vintage on wines tasted from the bottle in Bordeaux in November 2021- chapter "2018 IN BOTTLE" in "VINTAGES".

5. The Burgundy blog in the News chapter is a new feature, including impressions from Burgundy tastings/tasting dinners attended since November 2018. It'll also have impressions on tasted wines from Beaujolais' best winegrowers. I explored this wine area in April 2022 while tasting Morgon Cote du Puy from five producers in 2018 and 2019. A tasting of top cuveés from the same producers will follow in June 2022.

6. In addition to my website, I also post tasting notes to an excellent website run by Pekka Nuikki from Finland, www.tastingbook.com, where I have 11.000+ followers and 2.850+ TNs by mid-June 2022.