A hedonistic wine from Pomerol, well-placed in Bordeaux'elite 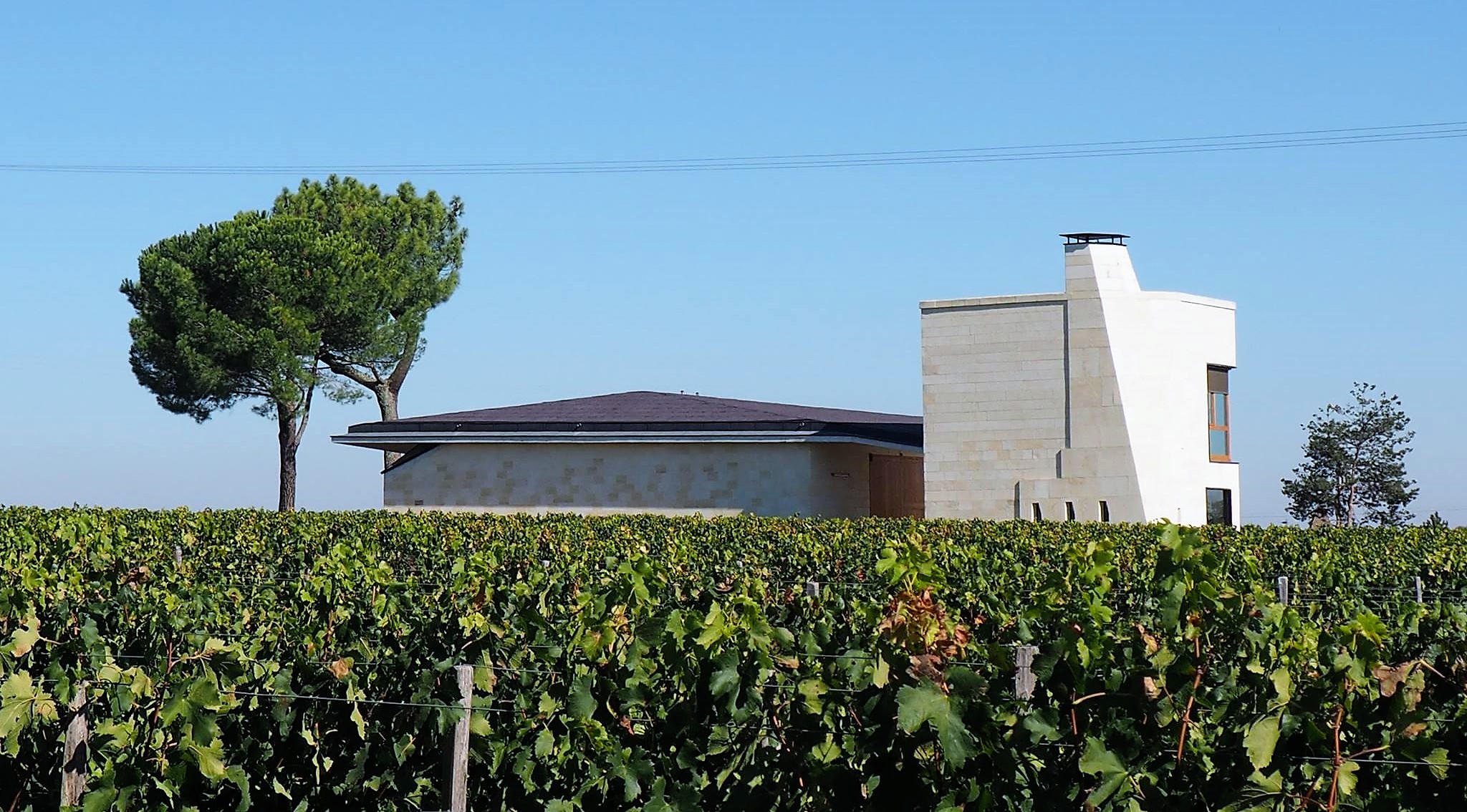 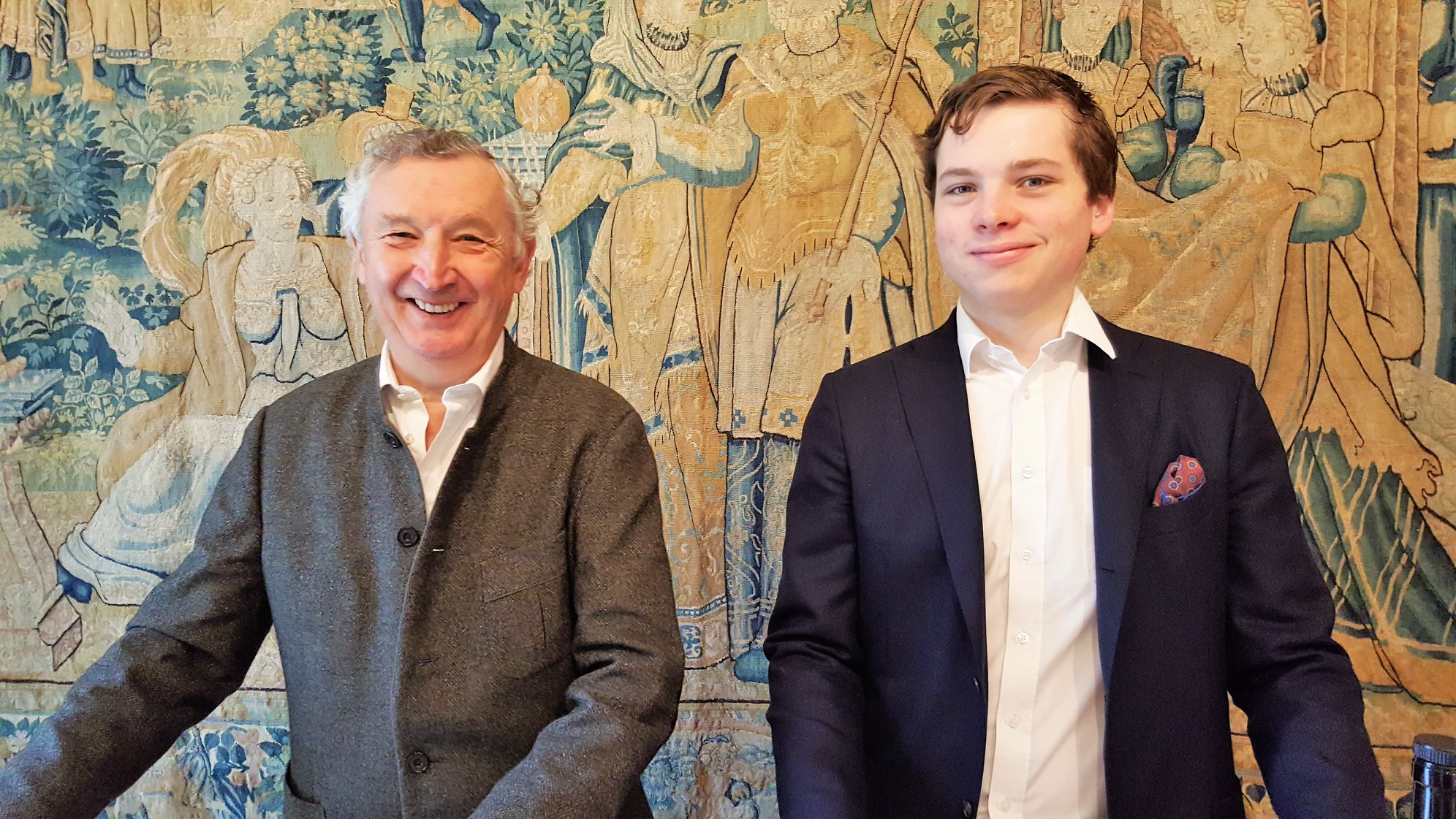 Jacques Thienpont with one of his two sons

This little property gem is now one of Bordeaux's most expensive and sought-after wines. But before 1985, Le Pin was not well known and not that expensive.

Until September 1985, I knew nothing about Le Pin's existence, so discovering this property was a proper stroke of luck because my visit was not even planned. When I was on my way to Cheval Blanc from Libourne, I lost my way (with very good help from "conversation" with local dogs) by turning left after the cellars of La Croix St.Georges and not continuing straight down the road from Catusseau and turning right by crossroad app. 500 m from Catusseau.

I did ask one of the pickers from a nearby vineyard about the correct way, and he sent me to a very sympathetic and smiling gentleman who worked at the neighbouring vineyard on the right side. In this way, I've learned to know Jacques Thienpont from the well-known wine-merchant family Thienpont, who originates from Etikhove in Belgium. He promised me to show the way to Cheval Blanc, but I should first taste his wine, 1984. It tasted splendid. A few months later, I bought Robert Parker's book "Bordeaux" and learned quickly which wine I learned to know!

Jacques' father, Marcel, and his brother Gérard bought Le Pin in March 1979 from heirs after a certain Mme Laubie. She owned the property from 1924 to 1979, and in all these years, she sold the wine as nameless bulk to Bordeaux wine negociants. Jacques Thienpont, educated at wine university in Bordeaux, became responsible for the property and wine. 1979 was the very first vintage of Le Pin with this name on the label.

There is no château here; only a humble farmer's house was inhabited by a couple who took care of Le Pin, while Jacques Thienpont (who has a little négociantfirm) frequently travelled between Etikhove and Pomerol. The property's name has always been "Le Pin" (stone pine), which refers to a big tree growing by the vineyard. In 2010, the house was demolished, cellars moved temporarily to the new place, and in 2011 for primeur week, a new state-of-the-art building with a tasting room and cellars was open for visitors. This giant tree was gone too.

Le Pin is situated in the outskirts of Catusseau, in the middle of the clayey plateau and app. 1 km southwest of Vieux Château Certan. The soil's surface here consists mainly of gravel mixed with a bit of clay and sand, while the underground has two layers: first, a blend of rock and sand, then an app. 2.5 m deep layer of clay mixed with iron dirt ("crasse de fer"). The soil here is very poor due to no fertilisation during Mme Laubie's ownership, so the vines' roots have to search deep down in the subsoil and fight to find nutrition.

That is why the yield per ha here rarely exceeds 30 hl, which means that the wine gets more concentration. There was 1.25 ha to start with (1979), later came 0.3 ha (1984) with 30 years old vines situated between Vieux Château Certan and Petit Village, and in 1985 Jacques Thienpont bought for a lot of money a 0.7 ha big parcel "Domaine de Vieille École" with 70 years old vines bordering Le Pin's vineyard. Jacques Thienpont is a talent-blessed wine-maker who always tries to improve his wine.

In 1979, Michel Rolland and Jacques Thienpont started experimenting with alcoholic fermentation in barrels in Le Pin cellars. This vinification technique has been broadly used since the 2004 vintage. Le Pin's soil is considered hot, which means early harvest (Le Pin is one of the first properties to start earliest) and is very vulnerable to drought and vast quantities of rain. This means that Le Pin doesn't hit the roof in extremely hot and extremely wet vintages.

Le Pin is, without exaggeration, an exceptional to fantastic wine. It immediately captures the attention of a wine-lover with its incredibly tempting appearance, a very marked lusciousness and exotic character. However, I think this exotic character has been missing since the 2005 vintage, which doesn't make Le Pin lower in quality, only that this wine became more typical Pomerol. In the 2010, 2016 and 2018 vintage, the kinky and exotic style of Le Pin has come back!

With such small qualities for the whole world, it is easy to understand why Le Pin has the status of a cult wine and why it is so demanded. There is so little of it that the price for the last 10+ vintages has reached astronomic heights. Not many can afford this wine!

Tasted in November 2021. I'll use the exact words to describe this wine as I did for 2020. Because it was similar to its one-year younger brother, and the only difference was a little more kinkiness in 2019 than in 2020.

Tasted twice - last time in November 2021. Consistent notes. 100% Merlot. 14.5% alcohol. I lack words to describe this wine. So it will be a short description. Fantastic density, kinkiness and exceptional midpalate. Liquid cashmere.

Tasted in April 2018. This barrel sample was creamy to a great extent, sophisticated, elegant, and with great structure and complexity. 100% Merlot. Top-quality in 2017 for an awful lot of money, but if you can afford it, you will be thrilled!

Tasted twice - last time in October 2017. Awesome wine here, 100% Merlot, low yield per ha (only 28 hl!); I would have liked to compare it to 2015, but it wasn't possible as 2015 was resting in vats for upcoming bottling. A distinguished, refined, rich, velvety wine with stunning complexity and depth Btw, 2016 was the first vintage at the property to be harvested in October (4th-8th)!

Tasted in March 2015. Very intense nose of black fruit, good acidity, well-defined and well-composed, with splendid structure and finish. Superb wine, but imho it lacks a bit more depth and complexity, as you would have expected from a wine at this price level. Several wines in Pomerol are better than Le Pin in this vintage, but it can change when this vintage is in the bottle.

Le Pin 2013 - the whole crop was declassified due to the poor quality of the grapes not being up to the standards of the property.

I tasted in March 2013. Silky, velvety, very mineral, elegant with many finesses, subtle and refined.

Tasted in March 2012. Kinky wine with a silky texture.

Tasted in March 2008. Aromatic, light, round and without that many nuances. A vintage that won't be mentioned in history books.

Tasted in April 2007. Extremely seductive and silky wine all the way. Fabulous lusciousness and breed. A massive success for the vintage.

Tasted in April 2006. Immensely seductive and silky wine all the way. It had a wonderful sweetness of fruit and breed.

Tasted in November 2013 against another Pomerol big gun, Lafleur. Elegant and sophisticated, surprisingly á point ripeness of the fruit (sweetness), excellent balance and delicate aftertaste. A complete wine, rich and enchanting. Fantastic quality for the vintage.

Tasted in April 1995. Intense and nuanced. Concentrated berry fruit with much lusciousness, exotic scent, breed and fitness. Fine length and aftertaste. It will last for 8-12 years.

Tasted in April 1995. A very positive surprise with a nice concentration of luscious fruit, fine structure and complexity. It has a nice length and is a delicious mouthful.

Tasted three times - last time in December 2016. Almost black-red. Has an enormous intensity of ripe blackcurrants and blackberries. What depth, complexity and nuance-richness here!. Incredibly well-composed with many layers of superbly concentrated blackcurrant/blackberry fruit with lusciousness. Very long aftertaste. "Bull's eye!". Tasted in September 2015 from half bottle - not in good form, but stunning in December 2016 (rated 99p).

Tasted in April 1995. Very deep with a lot of chocolate and sweet fruit on the nose; what a complexity. Dense packed, compact, and very concentrated with plenty of perfectly ripe and sweet fruit. Exceptional wine and what a potential it has!. Matches easily vintages 1990 and 1989.

Tasted in April 1995. Very aromatic with splendid depth and breed, long on the palate with coffee and chocolate, splendid structure, nice amount of concentrated and luscious fruit. An incredibly delicious wine for the vintage.

Tasted in April 1995. Dark red. Has a tremendous intensity of fruit, a pronounced exotic flavour, fat and ripe tannin and a superbly concentrated berry fruit. "Thick" and with a long aftertaste. I will keep it for at least ten years.

Tasted in April 1995. It has a special aroma, something like a blend of wild cranberries and currants, elegant and with finesse, light and delicate. For some reason (slightly overripe Merlot?), this wine is not typical Le Pin, and we disagreed a lot about it.

Tasted in April 1995. Fragile and elegant with moderate fruit intensity and good length and aftertaste. Just lovely wine, which reflects Merlot's ripening problem in this vintage. Drink it not later than 1997.

Tasted in April 1995. Glorious colour, dark and dense. Fabulously well-composed with much finesse, incredibly attractive, ripe berries with sweetness, superbly concentrated, truffles everywhere. It is maybe Pomerol's best wine in this vintage!. It had at least ten years of life ahead.

Tasted in April 1995. Acetone, chemical, old confiture, not entirely passé, but wine's age is apparent. The arrival of Jacques Thienpont took place in March 1979, so there was neither time to clean up in the vineyard and cellar nor money to buy new barrels.