Phenomenal wine from Pomerol and one among Bordeaux' elite wines! 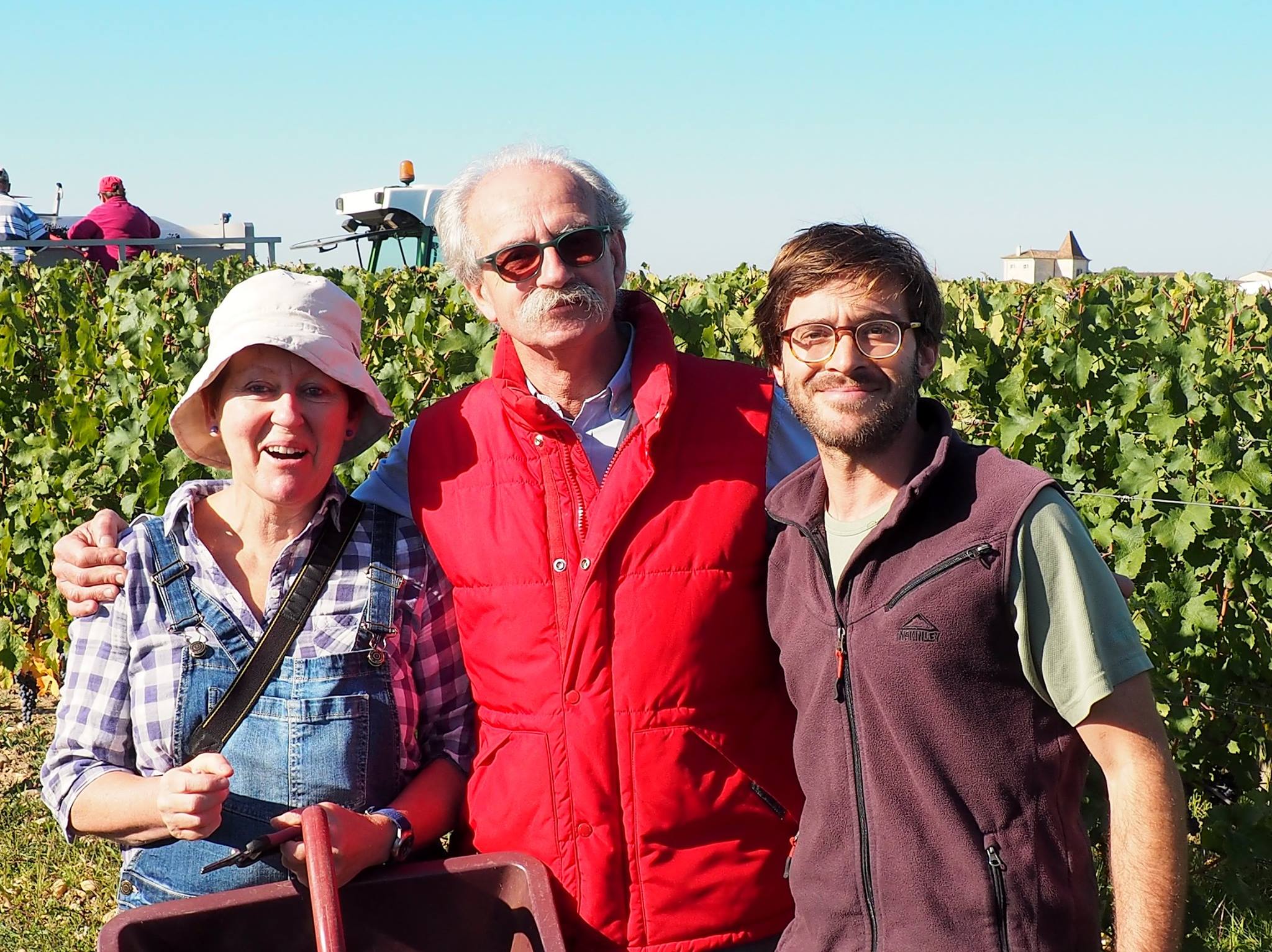 From the left - Sylvie & Jacques Guinaudeau, the owners of Château Lafleur, and Omri, vineyard's manager. September 2015 during harvest.

Pomerol is situated around 50 km east of Bordeaux city, between Libourne in the south, Isle river and motorway N10 in the west, Saint-Emilion district in east and Barbanne (a tiny tributary to Isle river) in the north.

Commonly, Pomerol's placement on the map is described as Right Bank because the Dordogne river runs several kilometres along the southwestern side of the district on its way to Gironde, meaning Pomerol "looks" at Dordogne river from the Right Bank of it.

Because of its small size, Pomerol has an affectionate nickname "Bordeaux' little garden" - this district is just 4 km long and 3 km wide!

In the eastern part of Pomerol, you find many famous names. This area is app. 900 meters wide and circle-shaped plateau in east-Pomerol, close to the border of Saint-Emilion. This plateau, which by the way is the highest point in Pomerol Pomerol (app. 40 meters above sea level), has got nickname "Le Plateau Argileux" Surface of the soil in the plateau is a deep layer of gravel mixed with clay and some sand. The subsoil here and many other places in Pomerol has a fascinating and distinctive composition and is only to be found in Pomerol and therefore not widely known. It consists of the so-called "crasse de fer" and clay. "Crasse de fer" is iron dirt or, more precisely, a very firm and stony blend of earth and metal with a high iron-oxide content, which gives the wines a very characteristic flavour of something fat and metallic that many associates with truffles.

Lafleur enjoys a perfect location within "Le Plateau Argileux". Lafleur has a varying blend of big and small stones plus sand on the surface. The subsoil here varies between "crasse de fer" mixed with gravel or sand in different proportions. This composition of the soil surface and subsoil strongly contributes to that cépage at Lafleur is Merlot and Cabernet Franc in ratio 50:50. There's nothing glamorous over Lafleur estate, but the wine is phenomenal.

Lafleur is the only property in Pomerol, which has so much Cabernet Franc in its wine. The vineyard is 4,5 ha big, vines are over 30 years old, and the wine stays 18-20 months in 33-50% new barrels. Jacques Guinaudeau, together with his wife Sylvie, has been at Lafleur since 1985 and acquired full control of Lafleur in 2005.

Jacques Guinaudeau is a perfectionist to the outmost of fingernails. The vineyard is painfully clean, every single vine receives loving care, and the wine has a "print" of soil and the winemaker. He uses modern techniques within vinification with utmost care and sensibility. He harvests late but not too late – grapes should be perfectly ripe and not end overripe á la marmalade.

Unlike traditionally made Pétrus, malolactic fermentation (malic acid is converted to lactic acid and wine gets rid of the excess of acid it doesn't need) takes place at Lafleur in barrels (instead of stainless-steel vats) to give wine more aroma, mere breed and more strings to play on.

How is Lafleur then? It's simply breathtaking wine with stunning concentration, intensity and richness of nuances, refined and sophisticated. It has a fantastic aroma of dark cherries, raspberries and truffles, and is especially in its early life (first 2-3 years) incredibly aromatic. Lafleur is a wine with incredibly long keeping potential - 30-40 years or even longer in extraordinary vintages. In these vintages, Lafleur is as stunning as First Growths! Check out vintages 2016, 2015, 2014, 2010, 2009, 2005, 2004, 2001 and 2000, and you will know what I mean! 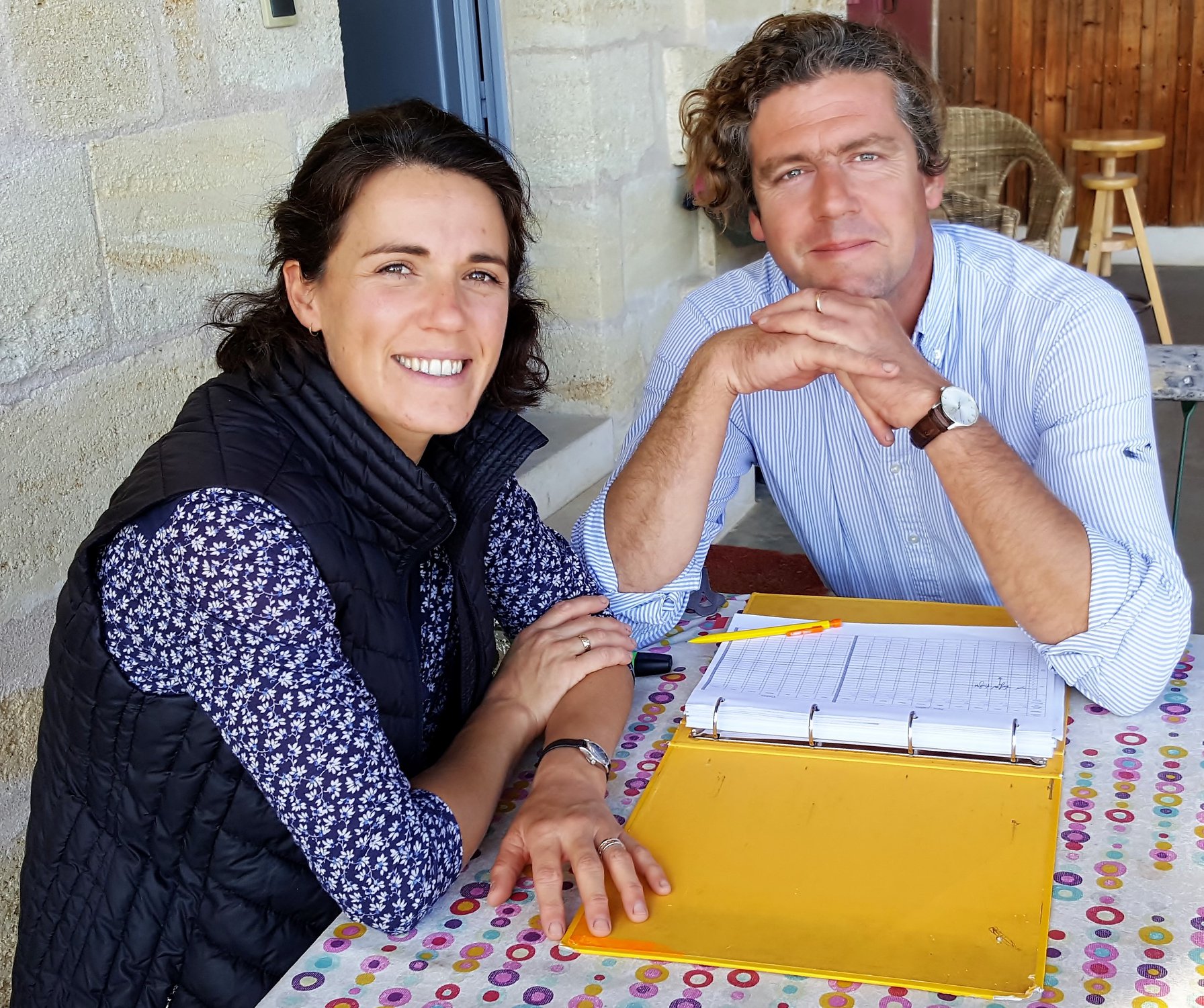 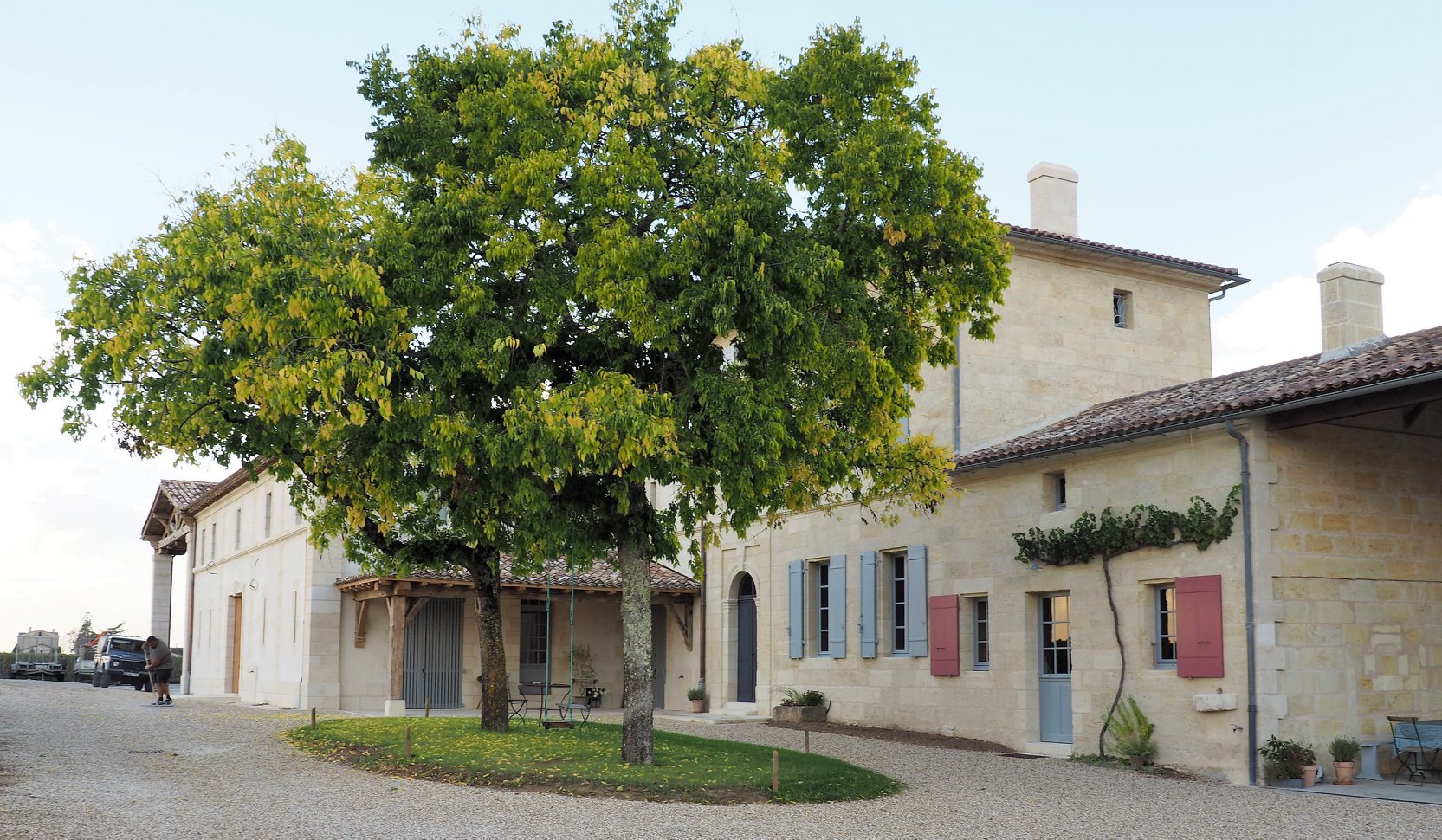 Tasted twice - last time in November 2021. Consistent notes. It was a great wine, deep, tight, dense and long. I'm not sure it mainly delivered all the things the day I tasted it, but I'm sure it will next time I taste it. 47% Merlot + 53% Cabernet Franc.

Tasted twice - last time in May 2019. Consistent notes. This wine was big, broad-shouldered with a classy and sophisticated nose of black fruit, velvety texture, rich, incredibly complex and long. Distinguished beauty to remain beautiful for many, many years.

Tasted four times - last time in May 2019. Not consistent notes. In April 2016, it was surprisingly light in colour, a lot of oak, a fine potential was unquestionably there, but this wasn't proved at all during my tasting that day. 92+p. Retasted in October 2016 and entirely another story. An iron fist in velvety glove, almost brutal at the palate with enormous intensity and concentration. Stunning richness, structure and depth. Another legend is on the way. 99p. A tad subdued in March 2017, not as silky as 2016. 96-97p. After bottling, this wine switched on afterburners. thick, fat, lot of fruit and tannin, creamy and sophisticated. 99p.

Tasted in April 2014. This wine benefitted a lot from a late harvest of Cabernet Franc (mid-October) with vast quantities of black fruit, strong backbone and elastic structure, minerality and long persistent finish. Beautiful work in this challenging vintage.

Tasted three times - last time in April 2014. Consistent notes. This wine has put on weight and intensity since primeur tasting in April 2013. Chocolate/cocoa on the nose, aromatic, very friendly, silky fruit and tannin, great structure and length. More elegance and finesse here than power and muscles. Not willing to show all its qualities in April 2014, but I've to be patient.

Tasted five times - last time in March 2015. Consistent notes. For me, it's the best wine in Pomerol in 2011 vintage. Jacques Guinaudeau made a fantastic 2011, approaching almost the quality of 2010 vintage here. Extremely dense and tight, full of black cherries, very sophisticated and refined, an exceptional balance between fatty, ripe tannins and perfectly ripe fruit, stunning aftertaste that goes on and on. Breathtaking stuff.

Tasted three times - last time in September 2012. Consistent notes. It possessed a hugely aromatic nose of dark berries like blueberries and blackberries, was full-bodied, refined and had a large amount of ripe tannin. In September 2012, it was full of massive fruit and tannin, backward and with a substantial finish. Keep it for 10-15 years before drinking it.

Tasted six times - last time in March 2015. Consistent notes. You hear angels sing! 2005 will be a worthy rival to the unforgettable 2000 vintage, with its depth, breathtaking richness and refinement. Very dark. An incredibly potent wine, an intense and sensual nose of wild cherries, almost essence stuff on nose and palate, velvety all over, mighty, iron fist structure and fantastic balance. It feels like this wine is just pure silk from start to end. Mind-boggling wine.

Tasted twice - last time in September 2012. Consistent notes. 50% Merlot and 50% Cabernet Franc. Very complex and intense nose of extremely ripe fruit, quite spicy and with a touch of heat. A splendidly structured and balanced wine, full-bodied and very long on the palate. This was as it tasted from the barrel in 2004. In September 2012, it was powerful, black cherries, deep and sophisticated to start with. Gradually it got a slightly warm scent on the fruit, and tannin started to show more and more dryness. I'm not sure about keeping possibilities.

Tasted twice - last time in April 2006. Consistent notes. 60% Merlot + 40% Cabernet Franc. Wonderfully aromatic and catchy nose, elegant on the palate with round tannins. Splendid structure and long aftertaste. Not as exciting as 2001, but who cares. An excellent wine for the vintage.

Tasted seven times - last time in September 2012. Consistent notes. 60% Merlot + 40% Cabernet Franc. This vintage has always been one of my favourite Lafleurs. A wine I always have adored, mainly because of its incredibly captivating nose of truffles, black fruit, richness, sophisticated touch and fabulous structure. Utterly impressive stuff.

Tasted twice - last time in April 2006. Consistent notes. A complete wine with exquisite complexity and finesse. Well-balanced and well-put-together, splendid depth and soft aftertaste. Stunning wine for the vintage, which should keep well for 10-15 years.

Tasted twice - last time in April 2006. Consistent notes. On the light and elegant side with a fruity nose of raspberries. Quite well-defined on the palate with good structure and length. Will mature relatively quickly, which means 6-8 years.

Tasted in November 2013. Tight and concentrated, powerful and rich. Excellent depth, balance and length. Firm finish. Many years to go. Jacques Guinaudeau did get max. out of his grapes in this vintage. Great effort.

Tasted in September 2012. Oh my God, what a wine. No doubt that it was a 1982 vintage! Heavenly stuff. Extremely dark and dense. Wild and incredibly intense nose with "tons" of mocha, bitter chocolate, extremely powerful on the palate with kirsch liqueur, extremely concentrated with extraordinary length. Perfect balance. So thick texture in this wine that you could cut it in slices. Christian Moueix and Jean-Claude Berrouet from close neighbour Petrus made this wine, and it shows, for 100% typical Lafleur this wine isn't. But who cares, as this wine was, is and will be a legend for many years to come. 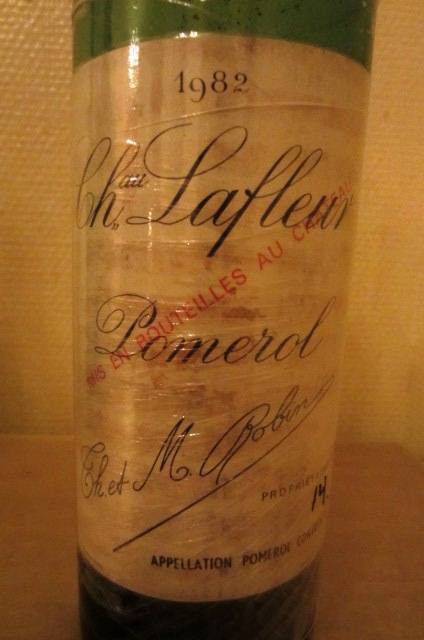 Tasted in April 2018.  Dense and tight with excellent depth, complexity and finish.

Tasted four times - last time in May 2019. Not consistent notes. Difficult to assess in April 2016, but a different story in October 2016. Aromatic, fine structure, wild cherries, silky, traces of chocolate, grained tannin. Splendid! Similar performance in March 2017 as six months before. In May 2019 too!

It was fresh, meaty with a strong backbone, powerful and firm finish. Well-knitted. Terrific second wine.

This wine was concentrated with a very nice length and structure, powerful and firm finish. Very fine indeed for a second wine.

It had a dark red colour, was very fine on the nose with intense black cherries. Meaty on the palate, medium weight, round and with silky tannins. Pretty lovely wine for the vintage.