An excellent Pomerol coming from a tiny vineyard in the garden!

One of the most exciting and longest visits during primeur in April 2013 was a little known property in Pomerol, Belle Brise. Not a single dull moment for 6 hours long visit!

I already visited Belle Brise in 1996, when I stayed 1 month in Pomerol, collecting material for my Pomerol book. When Jean-Luc Barreau from Certan de May visited Copenhagen at the beginning of 1996 for conducting vertical of Certan de May, I presented him a list of 50-60 properties I planned to visit, and he said OK for Belle Brise. I willingly admit that I didn't have a great expectation when arriving at this very little known property in Pomerol in May 1996. But things don't always the way you expect them to, so to my big surprise, the visit to Belle Brise in 1996 turned out to be something quite extraordinary.

Belle-Brise is situated in the south-western corner of Pomerol, just under one kilometre from Libourne centre and a few hundred meters from the railway (train Bordeaux-Paris). Tiny vineyard in the backyard of the garden!

The soil at Belle Brise is just exceptional - small pebbles and gravel on the surface, 1 m deep layer of clay mixed with "crasse de fer" at the top of chalk layer in the underground. These soil conditions are very atypical and quite remarkable for this part of the district, section of Réne and Toulifaut on the western side of the N89 road dividing Pomerol in two, where you usually find much sand on the surface and very little of "crasse de fer" in the subsoil. There are 2 ha of 80% Merlot and 20% Cabernet Franc, and the average age of vines is 35 years. A good portion of vines in the vineyard has an age of over 100 years.

When I arrived at Belle-Brise in May 1996, I was welcomed by Henri-Bruno de Coincy, a well-dressed and very energetic gentleman. He is a former bank employee (Banque de Suez in Paris) and bought this property at the beginning of 1991. Belle-Brise is surrounded by a wall and "contains" an extremely well-trimmed vineyard, 80-100 years old rose bushes by the entrance and a cosy house with a vinification cellar nearby.

I looked around and noticed an amount of big and new barrels in the corner of the cellar. He is probably the only wine-grower in Pomerol and, for that matter, in Bordeaux, who uses these 400 litres big barrels from Armagnac for ageing the wine, not the usual 225 litres ones. There is no chemical treatment of the vineyard. Late harvest, natural fermentation, no malolactic fermentation in barrels, no clarification with egg whites and no filtration - this is how things are done at Belle-Brise. 100% artisan winemaking without the help of an oenologist! According to the end of the full moon (going down- last quarter), the harvest time is.

Henri-Bruno de Coincy is a very passionate wine-grower, and his way of making wine reminds me a lot of the genius-like Francois Mitjavile from Tertre Roteboeuf. When he bought Belle-Brise – after a tip from a good friend and under the nose of many foreign buyers - and after seeing the vineyard and its favourable location. He did not know very much about making red wine. He's made Armagnac with his father since he was 16 years old, but red-wine is another story. He made a very fresh start, and while he worked with 1992 vintage, Philippe Giraud (Certan Giraud) visited him. The guest looked around in the cellar and asked Bruno de Coincy: "What is going on here, what are you doing?" for there was no temperature control by the vats and even no single thermometer in the cellar. Henri-Bruno de Coincy answered immediately: "I am making wine au naturel!". A wine merchant from Switzerland fell so deeply in love with 1992 Belle-Brise that he bought the entire production.

I can't explain why I haven't visited Belle Brise since May 1999 but came back to the property in April 2013. Nothing has changed, Henri-Bruno just got older but hasn't lost his touch at all, and his wines still are fabulous. They have a very significant aroma of wild black cherries and incredible balance.

I've visited then Belle Brise every year and thoroughly enjoyed his excellent wines!

Tasted in April 2022, Fresh, very cherry (both black and morello ones), some violets, vibrant, layered, complex and focused. Caressing finish. Delightfully stylish wine but understandably lighter than in the three recent vintages.

Tasted in November 2021. Twin brother of 2020! If I tasted this wine blind outside the property, I would immediately say " Burgundy"! Black cherries, seamless structure, silky berries and velvety tannin, great balance, sheer elegance and finesse. It's a totally sensual and sublime effort!

Tasted in November 2021. The second vintage of Henri-Bruno's new property, purchased in 2018. Similar to Belle Brise in the same vintage. However, in comparison, there was less intensity of flavours, lighter body and a shorter length in Corlacy. Still, it had enough elegance and finesse to seduce.

Tasted twice - last time in November 2021. Consistent notes. This wine was powerful and dense with an intense and significant flavour of black cherries (the hallmark of the property!), delicate, complex and with a long fruity finish. Pure delicacy. These TNs are from April 2019. When tasted from the bottle in November 2021, this wine seemed to have shed some power away and got a touch of elegance and finesse instead. Still a sublime effort!

Tasted in April 2018. Pure and clean, black cherries, great complexity and structure, meaty aftertaste. Lighter and softer than 2016 and 2015, but very seductive and charming wine.

Tasted twice - last time in April 2018. Consistent notes. This wine was very delicate, refined and with tasty black fruit and splendid length when tasted in April 2016. Harvest took one day in the middle of September before expected rain, and maybe grapes would have benefitted from hanging one week more on vines before harvest. The rain came all right but didn't cause any damage in Pomerol! In April 2017, it was clear that harvest time was rightfully chosen because this wine is a tremendous thrill. Incredibly aromatic, velvety, packed with perfectly ripe fruit and tannin, seamless, long and sophisticated. Very dense nose of black cherries. Same impression in October 2017 and April 2018.

Tasted four times - last time in April 2017. Truffy on the nose with this particular flavour of crasse de fer, very stylish and sophisticated, silky fruit and tannin. Simply delicious wine. However, it delivers not the same fine performance every time I taste it.

Tasted in April 2014. It had a very seductive cherry nose with a powerful aroma of grated chocolate, velvety texture with silky ripe fruit and tannin, delicate and sublime on the palate finesse and impressive length. You couldn't taste tannin, which was all packed in velvet. Impressive balance. Maybe slightly less intense than 2012. Great effort for the vintage. To retaste when in the bottle.

Tasted in April 2013. Similar to 2010, less tight and dense than 2010, more red fruit and less black fruit here, incredible balance. Worth every point of its rating.

Tasted in April 2013. It was beautiful wine for the vintage, full of life, velvety, impressive ripeness of fruit and tannin, structure and length.

Tasted three times - last time in April 2017. Consistent notes. It displayed an incredible intensity of blueberries and blackberries on the nose and concentration of same on the palate, very truffy, perfect ripeness of fruit and tannin excellent structure and depth, refined and sophisticated, fantastic complexity. Almost as impressive as 2010, tannin is less fat here.

The price of Belle Brise is between 70-100 €/bottle, but there's no problem with selling it as there's a great demand for it in Singapore, Hong Kong, Japan and Switzerland. Several 3-4 stars restaurants in Paris have it on the wine list in many vintages. 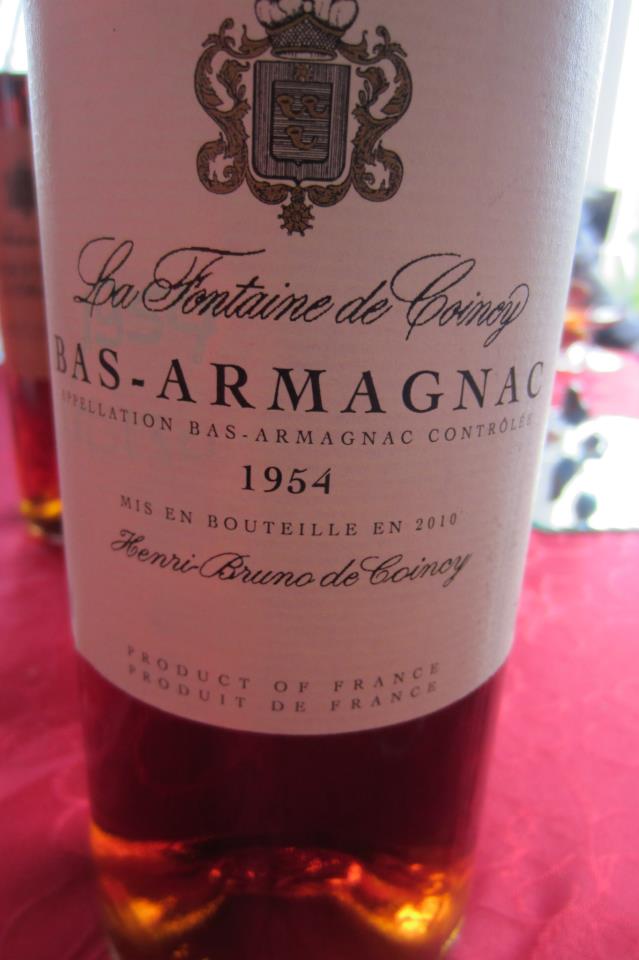 Stunning 60 years old Armagnac tasted in 2014 from Henri-Bruno de Coincy, who also owns Chateau Belle Brise. His Armagnacs can be as seductive as beautiful women. Before you know you are "trapped".

Since he was 16 years old, he's been producing fantastic Armagnac at the family estate in the best part of the appellation. De Coincy family has been making Armagnac for 700 years. Armagnac here undergoes double distillation (since 1973), while most producers there use one distillation. Its name is Fontaine de Coincy, and it fetches prices from 200 € and up. He's Armagnac on stock back to the 19th century. In April 2013, I tasted heavenly vintages 1979, 1973 and 1954, plus incredibly aromatic and orange influenced Fleur d'Armagnac a l'Orange. Certainly, one of the very best Armagnacs ever produced!

Strangely, recent books about Armagnac don't mention La Fontaine de Coincy at all. Why? It seems to be a well-kept secret for Armagnac aficionados too.